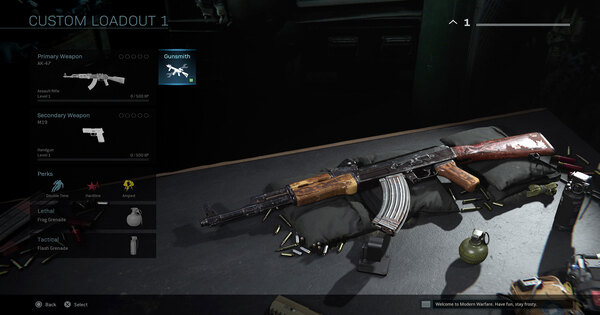 Check out the best Assault Rifle (AR) & Setup in Call Of Duty Modern Warfare 2020 & Warzone! Find out Assault Rifle tiers like M4A1, AS VAL, AN94 & their setup and tips in COD MW!!!

Details of these recommended weapons can be found below!!!

S ranks are given to assault rifles that have good performance and/or require very little resource to reach decent status. Some of these require a bit of practice with recoil management but the advantage they give is worth the effort.

All-Range Easy To Use Weapon

Despite numerous changes, M4A1 is still a very easy to use weapon with minimal recoil and no weird muzzle climb patterns. It is a reliable and steadily performing AR that can deal with most battlefield situations.

M4A1's recoil pattern was changed in past updates. Now, it would require some practice if you are aiming to extend the weapon's effectiveness at hitting targets from afar (which you should). Use bots to get practice easily!

Kilo 141 is a weapon you can get a hold of very early. It has very minimal recoil compared with other weapons and has solid performance stats that allows it to be wildly customized. Its low recoil also means that it performs steadily at range.

The main advantage of Kilo 141 is its soft Aim-Down-Sights speed and very easy to handle recoil. While it is not the fastest shooting Assault Rifle, these 2 characteristics make the Kilo 141 able to respond to most situations for almost anyone.

The Ram-7 has a high Rate of Fire (RoF) and can down targets quickly, while its fast Aim Down Sights (ADS) speed makes getting your sights on target a very relaxing job. Ram-7 has more recoil than others, but if mastered it can turn into a beast of a weapon.

Recoil Needs Some Getting Used To

Ram-7 has a bit more kick per shot and the recoil bounces to your left when auto firing. It may take some practice to fully adapt to this

FAL could deal heavy damage up close & to the head after recent buffs while retaining its good damage at range, making it a good weapon for picking people off or brawl with. Its effectiveness is largely swayed by the user's skill level.

FAL has a up-kicking recoil pattern that may seem steep but is very controllable with practice. We recommend players get used to the weapons by setting up bot matches.

First introduced in Season 4, the CR-56 AMAX boasts a higher damage per shot at a slower fire rate. Its good damage and range profile as well as moderate recoil makes for a very competitive main weapon to use up close and afar. Players looking for a bigger bang per shot will enjoy this weapon.

Check out AN94 stats here!

AN94 fires the first 3 rounds as a quick burst that has hardly any recoil before reverting back to full auto, shredding their targets if all 3 shots hit. The burst also makes it easier to hit longer ranged targets, letting AN94 perform well beyond most standard range.

By letting go of the trigger immediately after firing the burst, you can reset the burst so that you can fire off bursts in quick succession. This technique requires some practice especially under stress but is pivotal to this weapon's performance.

Check out AS VAL Stats

AS VAL has good damage profile, a high fire rate, decent ADS speed in a full package that can shred targets up to mid range very quickly. However, its fast fire rate with its steep vertical recoil can be hard to hit targets consistently if not familiarized. Even so, AS VAL's fast kill time gets it an S rank.

AS VAL's would require some practice if you're aiming to extend the weapon's effectiveness at hitting targets from afar (which you should). Use bots to get practice easily!

Details of these recommended weapons can be found below!!!

Weapons That Does What Its Supposed To Very Well

A-ranked weapons are Assault Rifles that does what its designed to do. Its stats are suitable for the task at hand and is not gimped by some bad stat that affects its roles.

Needs Some Attachments To Fully Shine

A-ranked weapons do require some attachments to fully develop but is still usable without them. Once you decked their attachments out, their performance will grow substantially.

Slow But Steady All Range Rifle

Oden 's RoF is one of the slowest but it makes up for it with high damage per shot. If all shots hit, it can kill very fast in 3 shots or less at most ranges. It is a weapon which performance varies on your ability to track and put rounds in targets consistently.

Aim to control Oden's vertical recoil with skills and attachments. It can turn into a laser-like accuracy even in full auto with the right attachments. Then, try to hasten its ADS speed.

Almost No Recoil Per Shot

M13 has a very low recoil that only jumps upwards, making it one of the most easiest weapons to control recoil-wise. Its damage per shot isn't too high but its high fire rate somewhat makes up for that. If setup right, M13 can shoot like a laser.

Different assault rifles have separate roles based on the restriction of its stats, that makes them better suited for different roles such as a mid-range rifle or close quarters weapon. Whether the ARs have the stats or attachments to maximize these roles are part of the considerations.

A weapon gets higher ranking if it can perform multiple roles. If a weapon can be effective at range even if its primarily a close-quarters weapon, then it gets a higher ranking.

How soon these Assault Rifles can be acquired is also considered in the ranking. If a weapon takes forever to grind out, then it may affect its ranking since players might be better off grinding attachments for other weapons instead.