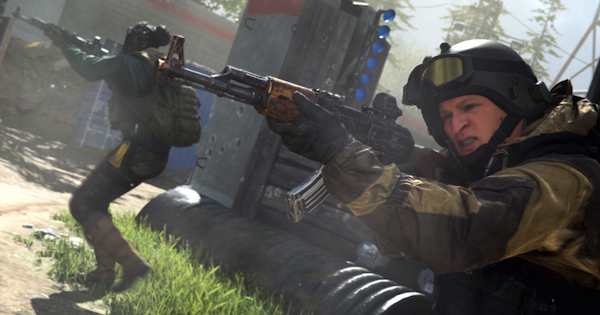 The Gunfight Mode Tournament is now live for a limited time! Squad up with a friend and compete against 16 other teams for a chance to win cosmetic prizes and earn tons of XP!

Check Out the Gunfight Tournament Here!

Gunfight is a 2 versus 2 team deathmatch with objectives. Each side starts with the same loadout, with the weapons and equipment changing after every 2 rounds. Teams switch spawn points after every round. The team with the highest number of rounds won wins the match.

To win in Gunfight, a pair must defeat all enemies or succeed by capturing the objective. After a set amount of time, a flag appears in the middle of the map. The first pair to capture it wins. Should any side fail to capture the point within a specific time, the pair with the highest combined health wins.

A new variation to Gunfight is called On-Site Procurement (OSP). In OSP, you will not spawn with any weapons or equipment in your loadout. Instead, you will need to pick up items scattered around the map to arm yourself!

Once you pick up a weapon, your teammate or the enemy team will not be able to get the same weapon. Hunt down a strong weapon to turn the tides of battle!

Check Out the Best Weapons Here!

Weapons that spawn on the map are random. You will need to make do with what you have!

A more relaxed version of 2v2 Gunfight with all players being able to bring their custom loadouts into the match. Players can change loadouts before every round.

Although small, each map in 2v2 Gunfight has its own unique features and pecularities. Try to remember each map's layout so you can use them to your advantage.

Go From Cover To Cover

A round is over once you get killed. Try to move from cover to cover when navigating the small maps. Also try to avoid covers that can be shot through as you can get killed while hiding behind them.

Health Does Not Regenerate

You cannot recover health in Gunfight even if you take cover after taking a tremendous amount of damage. Be wary of every encounter and try to use cover to minimize damage. The combined health of both teams is always displayed on the top of the screen.

Communicate With Your Teammate

As you only have one other person in your team in Gunfight, share enemy info and location whenever possible and cover each other. Coordinate movements to outwit and outlast the enemy team!

A viable strategy in Gunfight is to have each player split up to cover both sides. Use enemy footsteps to gauge your opponent's distance!

Use The Objective As Bait

If both sides fail to eliminate each other after 40 seconds, a capture point will appear. The team that captures that position wins the round. Since it requires a few seconds to capture, you can use the objective as bait to lure out enemies.

Capitalize on Your Loadout's Strengths

Although random, take advantage of the strengths of your loadout and use them effectively to eliminate the opposing pair. Always check your secondary after every weapon cycle to know viable strategies you can use.