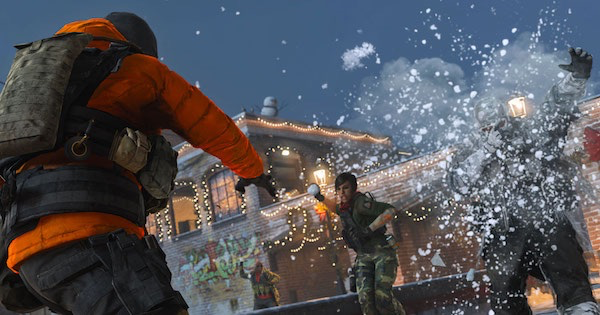 Snowfight is a modified Gunfight and is a time-limited holiday-only game mode. It replaces the random guns with snowballs that players must pick up instead. Both pairs must use snowballs, their fists, and their wits to outplay the opposing pair.

To win in Snowfight, a pair must defeat all enemies or succeed by capturing the objective. After a set amount of time, a flag appears in the middle of the map. The first pair to capture it wins. Should any side fail to capture the point within a specific time, the pair with the highest combined health wins.

Snowfight can only played in game map: Docks, or more specifically its holiday version, Winter Docks. The layout remains the same and players that have memorized Docks are certainly at an advantage.

Health Does Not Regenerate

You cannot recover health in Snowfight even if you take cover after taking a tremendous amount of damage. Be wary of every encounter and try to use cover to minimize damage. The combined health of both teams is always displayed on the top of the screen.

Attack With Your Snowballs

Snowballs behave similarly to a Grenade, following an arc instead of a straight trajectory. They can be picked up and stored. Gather them before attacking the enemy pair as running out of snowballs in the middle of a fight can be fatal.

There are two types of snowballs that you can pick up in Snowfight: White and Yellow ones. The white ones deal 35 damage while the yellow ones immediately kill those that it hits.

Another good strategy is to close the gap and attack with your fists. Enemies staggered with a melee attack may find it difficult to land a good snowball throw. However, do mind that they can shoot you down as you go in for the kill.

Use The Objective As Bait

If both sides fail to eliminate each other after 40 seconds, a capture point will appear. The team that captures that position wins the round. Since it requires a few seconds to capture, you can use the objective as bait to lure out enemies.