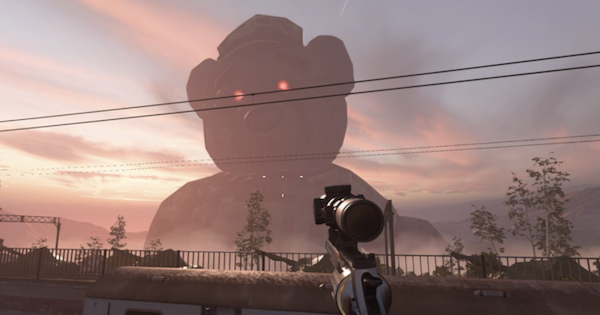 Read this guide to know the Easter Egg in Season 6's Station map in COD MW & Warzone! Get to know how to summon the "Bearzilla" in season 6, how to get and input the codes, & more!!!

Check Out The Season 6 Update Here!

What Is The Season 6 Station Map Easter Egg?

The bear looks familiar because it appeared in this Season 5 easter egg!!!

The Station is a small map introduced in Season 6 and is mainly used for Gunfight matches. In this map, you can destroy parts of the station to reveal numbers that you must input to summon a giant red-eyed bear. This Easter Egg lasts only a couple of seconds.

Hard To Pull Off In A Real Match

As this Easter Egg requires you to shoot down several parts of the train station, the chances of pulling this off in a match is almost impossible. As you need about several magazines to reveal each number for the code, fighting while doing this is definitely out of the question.

No Impact On The Map

While seeing a giant bear fall down from the sky is a spectacle in its self, the easter egg has no other effect on the map.

How To Summon The Giant Bear

How To Do Station Easter Egg

There are 6 tiles in total that you can shoot to reveal the 5 digits required for the code and the keypad. Taking each one down takes time so bring an LMG so you have enough ammo to destroy them.

You cannot redo this Easter Egg once you successfully pull it off in the same map. You need to reload and restart the Station map for you to do this again.

Numbers Are Random Per Fight

The numbers revealed after destroying parts of station are random. This means that the code changes per fight.