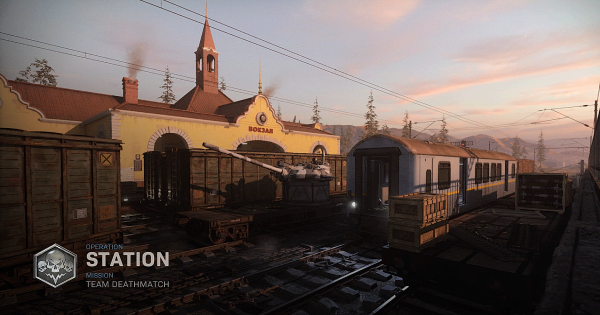 The Station is a map that features multiple narrow corridors and paths, especially at the central area with multiple train cars. The area is also littered with tons of cover such as half walls and crates that can be used to ambush enemies!

Either end of the map is open with little cover options. These areas allow more wiggle room for players who like to shoot at enemies from range, rather than relying on sneak attacks.

Use Burst Weapons In Tight Corridors

Burst weapons such as SMGs or Shotguns will perform extremely well when fighting at the center of the map. The extremely high damage output can quickly kill enemies that you may run into!

Use Tacticals to Your Advantage

It can also be beneficial for you to use certain tactical equipment such as Flash, Smoke, or Stun Grenades to impair enemies before going in for the kill. Throw a tactical before charging in to gain the advantage against one or more enemies!

You Can Snipe Enemies From Afar

Due to the fairly open areas on either side of the map, you can opt to stay here and snipe at enemies coming at you! Use the tight corridors as choke points and take out enemies as they carelessly run towards you!

Use Top Of Trains To Ambush Enemies

The center of the map will also have some train carts which you can climb onto to get a better lay of the land! You can drop down to get a surprise attack against enemies who have their backs turned to you!

You May Be Easy To Spot

However, keep in mind that these elevated areas provide no cover. Enemies will be able to spot you. If you see a glint from the enemy sights, jump down to avoid getting shot!

This map has an easter egg! Destroying the station's tiles will reveal numbers that you can input onto a keypad. Once you've successfully entered the code, a giant teddy bear with red eyes will appear!

Check Out The Easter Egg Here!

Station is a small and narrow map that is mainly used for the gunfight game mode. The central area consists of several train cars which cater to close quarters combat, while the ends of the map are more open for longer ranged weapons!