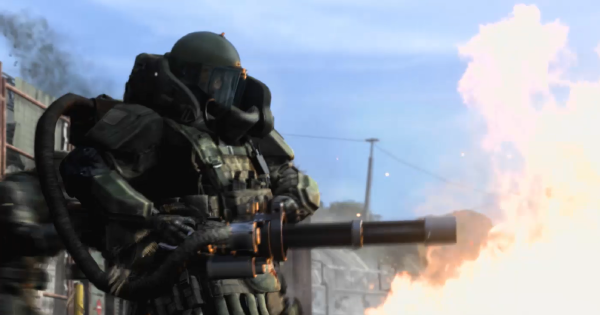 All You Need To Start Gunning

This build contains everything you need to start learning the ropes of being a deadly rifleman. A versatile and easy to use rifle? Check. A perk to boost your mobility and grenades? Check. You will also be able to control the flow of the fight via killstreaks!

Can Be Assembled Early

All you need to do is reach a maximum of Rank 13 to fully assemble the loadout. This can be done in approximately 90 minutes of multiplayer gameplay.

2 Lethal Items At your Disposal

Throw a Molotov when in doubt! The Shrapnel perk will allow you to carry 2 lethal equipments, allowing you to use them more freely. Throw Molotovs at objectives or through windows to damage unsuspecting enemies!

Get Intel Constantly With Hardline & UAV

Hardline Perk reduces the killstreak cost by 1, meaning you'll get Personal Radar fast with 2 kills, and a UAV with 3 kills. They will give enemy positions to you on the minimap, helping you and the whole team!

Check out All Perk Guide here!▲Back To Table Of Contents

This loadout increases your flexibility thanks to the Overkill perk which lets you equip 2 primary weapons. The M4A1 or PKM weapons can get you easy kills in mid range, while switching to the MP5 turns you into a deadly close quarters soldier.

This build is especially useful when fighting in enclosed spaces. Other than using MP5 submachine gun to clear rooms, you can lock down corridors with the suppressive prowess of a mounted PKM, or an assault rifle.

Learn the Mounting Mechanics With This Guide Here!

Easy To Build Thanks To Low Unlock Level

Thanks to the low unlock level, the items in this loadout are relatively easy to obtain and use in the build. You will be able to gain an advantage against other players early on in multiplayer!

This build also helps you survive longer during matches thanks to the Claymore and E.O.D. You can cover your rear when moving with the claymore, while being resistant to explosives used trying to flush you out.

This loadout uses the 725 / R9-0 Shotgun's insane stopping power to be the brunt of assaults against objectives. Dedicate yourself on assault, breach & clearing out objectives non-stop for your team.

Use Pointstreaks Instead Of Killstreak

Since your focus will be on objectives instead of KD, you'll likely get more points from this other than killstreaks due to the inherent danger of being a breacher. Playing objectives will net more points however, so Pointman is chosen for this build.

Throw Everything You Got When Breaching

With 2 frags and a stun grenade, you can suppress an objective long enough to get close and personal with your 725 shotgun. Don't forget to toss everything before going in.

Works Great For Close-Quarter Maps Too

This loadout works well in smaller maps like Shoot House where encounter range is close. Swap Pointman for Ghost if you want to. For non-shottie user, use the loadout below.

Check out All Maps here!▲Back To Table Of Contents

This build focuses on being able to run around the map as fast as you can, while at the same time, being able to dispatch enemies as quickly as possible. This is best used in small maps as the MP5 is a close range weapon.

Having the Quick Fix perk is very useful in this build as it increases health regen per kill. This will allow you to sustain yourself during fights, and helps you participate in multiple back-to-back gunfights.

Throwing Knife is an Instant Kill

The throwing knife is also useful as it gives you another option on dispatching targets. Aside from being a one-hit-kill, you can also retrieve it from fallen enemies to use again!

Get Killstreak Faster With Hardline

Hardline reduces the number of killstreak by 1 which can be huge depending on the circumstances. With low-kill killstreaks like the Personal radar or UAV, you can almost use it every time for each life.

All Killstreaks List▲Back To Table Of Contents

This loadout focuses on taking the initiative to hunt down enemy units and exploit weaknesses in enemy lines to rack up kills. It focuses on stealth and recon for the user to determine the best method of approach.

May Require Some Grinding To Unlock Everything

Many components of this build are unlocked at higher ranking, making it difficult to obtain early on. Silencers needed for this build require the player to make many kills with the weapon to unlock.

Check Out The How To Level Up Weapons Guide Here!▲Back To Table Of Contents

Support Your Allies In Variety Of Ways

Instead of camping, this sniper loadout focus on moving along with your team & assisting them in as many ways as possible: You cover their breach with a replenishing Stun grenade, you shoot down pesky UAVS exposing your team, you spot and deal with claymores & C4 that's in their paths, while covering them with your marksmen rifle.

Spotter Perk lets you see and mark items through walls. It will provide valuable intel on hidden C4, Claymore & other dangers for you & your teammates. You can also hack explosives through walls.

Bring Down Killstreak Quickly With PILA

Whether its a UAV, a Gunship or a Wheelson, enemy killstreaks can be a pain for your team. As most players are optimized for making kills & can't effectively handle them, you have to pick up the slack and deal with these killstreaks for your team, making some points along the way.

Check Out All Killstreaks Here!

Be Generous With Grenades Thanks To Restock

Restock Perk lets you regenerate equipments over 30 seconds, so no need to be stingy - throw a frag or two before your buddies go into rooms or objectives.

MK2 Carbine has good damage, accuracy and quick fire rate. It can snipe but also be used for close quarters when you need it, making it a solid all-rounder.

Check Out The MK2 Carbine Here!▲Back To Table Of Contents

The Holger-26 can double as an Assault Rifle or LMG depending on its equipped attachments. Use this weapon effectively by holding down objectives or taking those from the enemy. It can also effectively take down enemy Killstreaks.

Take Advantage Of The High-Capacity Magazine

While you can make the Holger-26 a full-on AR (or SMG), discarding the hefty magazine can be very disadvantageous. With the high-capacity magazine, you can take on droves of enemies before being required to reload.

Check Out Other LMGs Here!▲Back To Table Of Contents

The Best VLK Rogue's main strong point is its insane speed (faster than Combat Knife with right attachments) and sprint-to-fire speed. For mobile players, this setup can be effective in small maps like Shipment.

Don't Be Afraid to Sprint

VLK Rogue has one of the best sprint-to-fire speed meaning you won't be punished too severely even if you sprint all the time. Double Time perk lets you sprint longer, giving you more mobility.

Defend Rear Or Close The Distance With Riot Shield

Riot shield will protect your rear when not in use, giving you some protection against back attacks. You can also switch to riot shield if you feel the enemy has a range advantage against you to close the distance.

What Are Custom Loadouts?

Below is a list of criteria that was used to recommend custom loadouts.

The recommended custom loadouts need to be versatile and flexible enough to still be viable when presented with different situations. It must be able to hold its own when an unexpected event happens during matches.

These loadouts must also be able to give the player sustain in order to stay alive longer. Staying alive will allow you to easily reach the required kills to activate killstreaks.

Recommended loadouts should also be able to have a high DPS in order to quickly rack up the kills. These allow you to get to your killstreaks faster, and further dominate the match.

Pick Something, Then Build Around It

There are many customization available in CoD: MW, and it is easy to get lost in the maze of choices. Pick 1 mechanic or focus like stealth or Ant-Air and set it as the center of your loadout, then build around that.

Test Out Your Loadouts With Bots

Dont forget to take your new loadout for a ride using bots! You might find that your focus could be underachieving or you need more utility rather than a one-trick-pony.

Check Out The How To Set Up Bots Guide Here!

Battlefield conditions change constantly: Sporadically occurrences such as a raging Infantry Assault Vehicle or a flying Gunships are rare, but just one could ruin your day & performance if you've got no way to counter them. Create loadouts to handle them before a fight.

The following loadouts serve a special or niche purposes. They may be too focused to be considered the best loadouts, but will serve well when the situation demands it.

Loadout to Single-Handedly Clear The Sky

This loadout lets you tackle anything that flies in the game so far - High damaging gun to eliminate drones while being able to fire missiles at high-altitude / fast aircrafts. Pop this loadout once in a while to help your team and get points.

Vehicles have higher mobility than infantry, and will often retreat from the area if they are under attack. This loadout has mobility covered so you can get to / chase down vehicles fast even if they run off.

You'll be at an disadvantage versus vehicles most of the time, so finishing them off ASAP will greatly determine your survival. Remember to fire PILA and Thermite at the same time to ensure maximum burst damage.