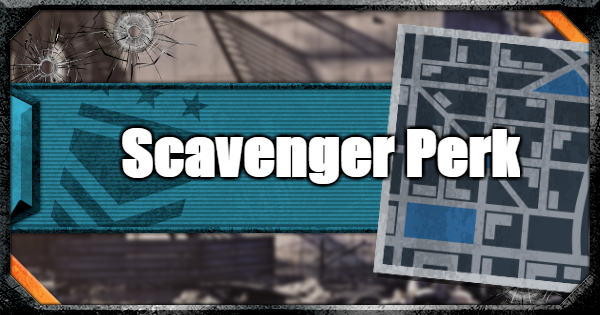 Check out Scavenger Perks explained guide in Call of Duty: Modern Warfare 2019 (COD: MW)! See what the perk does in multiplayer, how to unlock it and what combos work great!!!

Scavenger lets players replenish ammo from dead players on the floor. A good player could keep fighting for a long time by killing and refilling non-stop.

Some players can run and gun all day long racking in kills, especially on small maps. Ammo would quickly become a problem in this scenario, but Scavenger perk would would solve it by translating kills into ammo, letting them keep up their rampage.

Players on large & small maps benefit from Scavenger perk since resupply could be far and in between on larger maps and sometimes non-existent on small maps. If running dry is a more serious problem to you than dying, its time for Scavenger perk.

Restock refills 1 equipment every 30 seconds, making the player even more self-sufficient in the field. Gets even better with Restock Perk.

Deadline lowers the killstreak cost by 1, giving player access to game-changing killstreaks all that faster.

Hide Your Presence With Ghost

Ghost prevents digital surveillance and stops death markers of your kills from appearing, letting you get kills and ammo resupplies undetected.

Gather Intel To Know Your Approach

Snapshot Grenade & Heartbeat Sensor gives you a sense of the enemies around you, letting you plan your assault if you're only a few kills to go.

As you run and gun, leave Claymore behind for unsuspecting prey and to cover your rear. You'll be surprised with how much passive kills you can get in hectic Team Deathmatch or other quick play modes.

Throwing Knife is a powerful lethal equipment that can insta-kill enemies if it hits. Use throwing knife to kill enemies and get ammo from them without spending yours.