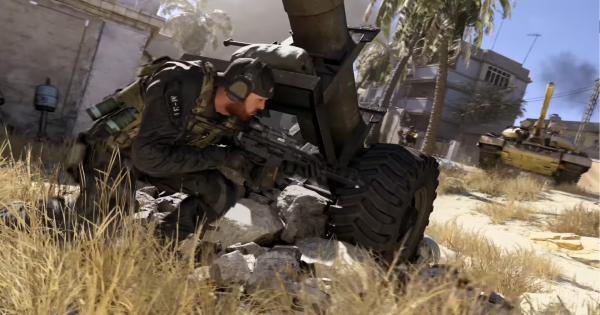 Learn new controls and actions for Call of Duty: Modern Warfare 2019 (CoD: MW)! Find out about new actions such as opening doors, uses for controllers, keyboard and mouse!!!

Mounting weapons to walls, ledges & crates is a new gameplay mechanic introduced to Multiplayer. This mechanic has several uses, and it is best to get the habit of mounting your weapon regularly.

Mounting your weapon is a great way to get a sitrep on certain areas before proceeding. By exposing as little of yourself as possible, you can avoid getting riddled by bullets if there were enemies lurking in that area.

Another great use for mounting your weapon is to safely clear corners. SInce you are not entirely exposed, enemies will have a harder time hitting you, giving you the upper hand when engaging tangos from a corner!

Having a weapon while mounted will also improve weapon stability and reduce the weapon's recoil when firing! This helps you keep you aim trained on targets when engaged in heated firefights!

These controls are based on prompts shown when doors are closed!!!

You will now have several options for opening doors when traversing through the map in different Multiplayer modes. The developers have taken the time to give your more tactical options when entering or leaving buildings.

Burst Through When Rushing Enemies

You can quickly get through doors and burst down enemies while they are blinded by tactical grenades. In their disoriented state, you can rush through the doorway and kill them before they regain control!

Peek Through Doors To Scan Areas

Peeking through doors is a great way to scout an area just up ahead. Since this move can be done silently, you can use it in conjunction with your squadmates to surprise unsuspecting enemies in rooms! Also useful for tossing in grenades.

Opening doors makes a distinct sound that may provide intel on troop movements. Pay attention to them while looking out for the sound you make when interacting with doors.

Switch Between Fire Modes Based On Situation

You can toggle fire modes of weapons by pressing B (by default), usually between semi and full auto. Some weapons may have distinct fire modes like burst fire, while some weapon may only have 1 fire mode. Going semi for targets father away can help conserve ammo.

Recoil Is Mostly The Same Between Full & Semi Auto

Quick-tapping with semi and going full auto has mostly the same recoil. There's no need to go semi in hopes that it'll have lower recoil.

Secondary Weapons Can Be Used On Ladders

While going up and down ladders, a player can still fire the secondary weapon (usually a handgun) if the player has one equipped. This gives you some self protection when moving up and down.

Cannot Reload While On Ladder

Initiate Melee Finishing Attack From Behind

Sneak Up Behind Your Opponents And Finish Them!

When you get behind an opponent, you can gold the melee button to initiate a melee Finishing Attack that will take out your opponent after a cutscene. As it usually takes 3~4 melee hits to down an opponent, this will let you finish off enemies faster in a cool way.

Benefits Of Using A Finishing Attack

Each Operator Has Their Own Attack

Finishing attacks are operator specific, meaning they change according to the operator. Try out different operators and see which moves are the most savage!

Check out how to Customize Your Characters here!