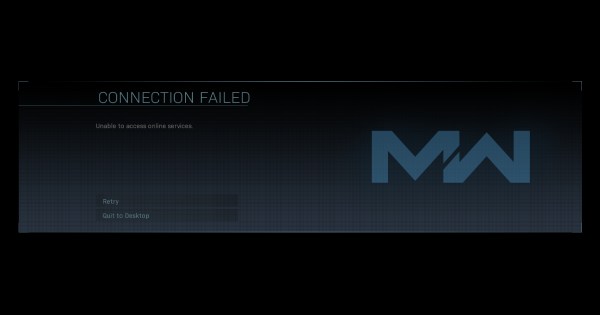 Learn all about Call of Duty: Modern Warfare 2019 (COD MW)'s connection failed error in this guide. This includes how to fix it, affected platforms, servers down issue & statue, and more!

How to Fix the Connection Failed Error

[UPDATE] Issue Has Been Resolved

Players should be able to launch Call of Duty: Modern Warfare now according to Infinity Ward. They noted in a tweet that the servers are live once again. This should fix the Connection Failed problem for all platforms!

Massive thank you for your patience and apologies for the delay. Crazy traffic tonight, but servers are coming back online now, and everyone should be able to begin launching Modern Warfare.

Set your mode to Offline to be able to launch the game in the Playstation 4 (PS4). This will give you access to the Campaign and Local Co-Op, but Multiplayer will be unavailable.

No Fix for PC & Xbox One

Currently, there are no fixes or workaround for PC and Xbox One Players for the Connection Failed Error. Activision Support has acknowledged the error, but have not released when it will be fixed.

Read Our Play Guide While Waiting for the Server

We are continuing to investigate the issue related to the huge volume of new players connecting to Modern Warfare. Players that are in game should be able to continue playing without interruption. We will continue to provide updates as quickly as we can.

We're actively investigating an issue where some players are unable to connect to Modern Warfare. Stay tuned for updates.

What is the Connection Failed Error?

Servers Down for Call of Duty: Modern Warfare

Across all platforms, players are unable to connect and launch Call of Duty: Modern Warfare. The error message "Connection Failed. Unable to Access Online Services" shows up when trying to launch the game.

There has been reports of certain players being able to access the game after multiple tries in accessing the game. Once you have logged in, the game seems to run in a stable environment as of now.

Happening to All Platforms

The issue is not limited to a single platform. PC, PS4, and Xbox One players are all experiencing the error. This could be due to all platforms sharing a server to accommodate crossplay.

I ant even launch the game on PC.

Just got new COD Modern Warfare for Christmas. I'm getting "Connection Failed, unable to access online services" message. I'm using PS4. Is this still an issue for majority of users?