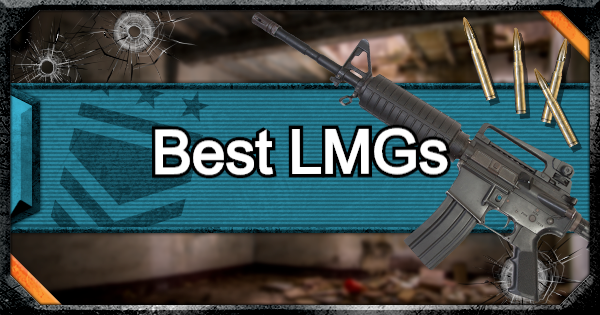 S Rank is given to light machine guns that outperform other weapons in their class. This may be due to the weapon's accuracy, large magazine count, and the like. If you are using this weapon in a match, expect to rack up a high number of kills.

The PKM is a versatile LMG that can perform well in most ranges. This is due to its high accuracy and large magazine size, allowing you to unload a storm of bullets should you encounter a number of enemies.

The M91 is a weapon that boasts an extremely high ammo capacity with 100 rounds in a single magazine. However, despite continuously spraying bullets, your shots stay accurate. The only drawback is the low mobility this weapon offers & the slower ADS speed that can be remedied with attachments..

The A rank is given to LMGs that perform well. These weapons can hold their own in a fight, but will shine more when there are attachments equipped.

Can Lock Down Areas

This WWII era weapon can still run with the best of weapons. Its high rate of fire can allow it to mow down enemies, especially when locking down tight spaces such as corridors.

The MK9 Bruen features a good rate of fire and stability, allowing it to be a threat from mid to long range. It's useful for both providing suppressive fire, or even getting kills on its own. It was extremely good but after numerous nerfs, its now more or less in line with other weapons.

The Holger-26 LMG boasts a large ammo capacity, being able to carry around 100 bullets per magazine. This allows you to keep your finger on the trigger for extended periods of time, allowing you to suppress enemies, or get kills. Its handling got a buff so its more reliable than before.

Higher ranks are given to LMGs with larger ammo capacities. This trait allows you to keep on firing for longer without needing to reload! This makes you more of a threat, especially when in drawn out fights.

LMGs that are able to stay on target especially at longer ranges have also been considered. This is due to the weapon's firing mode. Being able to hit your shots while continuously firing is essential for an LMG.