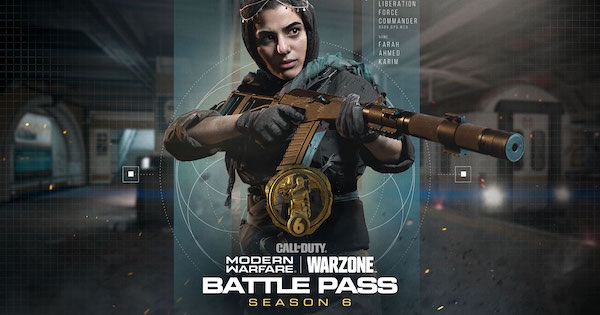 Guide for the Season 6 Battle Pass in Call of Duty: Modern Warfare 2020 (CoD MW) and Warzone. Including its rewards, release end date, reset, tiers, how to level up and price (cost)!!!

Season 6 brings with it a new Battle Pass full of new items and rewards! These include new operators, weapons, and other cosmetic items! These rewards are exclusive to players who've purchased the battle pass! Make sure to buy the battle pass to earn these rewards!

If you want the full Modern Warfare experience, you can get it by buying the Battle Pass Edition. This package includes the whole Modern Warfare game, complete with the campaign and multiplayer. Adding to it are exclusive skins and enough COD Points (CP) to purchase a Season 6 Battle Pass.

Similar to previous seasons, the Season 6 Battle Pass has several tiers that offer COD Points as rewards. If totaled, all would amount to 1300 COD Points, recouping and giving you more than the Battle Pass' 1000 COD Points initial cost.

Season 6 introduces 2 new weapons, the AN VAL and the SP-R 208. Both weapons are available as rewards in the Season 6 Battle Pass and are usable in both Warzone and Modern Warfare.

2 new Operators join the fight in Verdansk: Farah and Nikolai. Both characters have appeared in the game's main story campaign. The 2 are unlocked via the Season 6 Battle Pass and are usable in both Warzone and Modern Warfare.

Aside from their base skins, unlocking Farah and Nikolai also rewards you with alternate skins that you can use in battle. Note that in order to unlock both of them, you need to buy the Battle Pass with 1000 COD Points.

The Battle Pass is an in-game economy system introduced to Modern Warfare 2019. When a new "Season" releases, players can unlock season-specific loot by playing the game and completing challenges.

Are There Lootboxes In The Game? Read To Find Out!

What Was Included In Season 5

What Was Included In Season 4