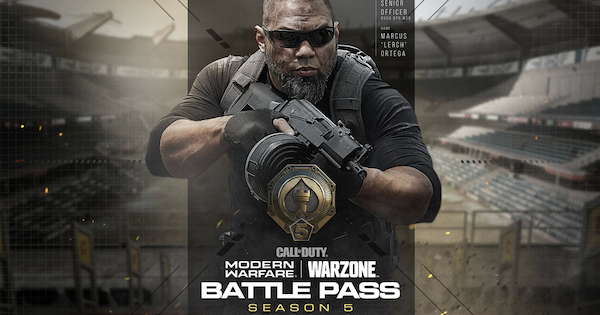 Guide for the Season 5 Battle Pass in Call of Duty: Modern Warfare 2020 (CoD MW) and Warzone. Including its rewards, release end date, reset, tiers, how to level up and price (cost)!!!

Season 5 brings with it a new Battle Pass full of new items and rewards! These include new operators, weapons, and other cosmetic items! These rewards are exclusive to players who've purchased the battle pass! Make sure to buy the battle pass to earn these rewards!

If you want the full Modern Warfare experience, you can get it by buying the Battle Pass Edition. This package includes the whole Modern Warfare game, complete with the campaign and multiplayer. Adding to it are exclusive skins and enough COD Points (CP) to purchase a Season 5 Battle Pass.

The Season 5 Battle Pass has several tiers that offer COD Points as rewards. If totaled, all would amount to 1300 COD Points, giving you more than the Battle Pass' 1000 COD Points initial cost.

2 new weapons can be had by leveling up your Battle Tier: the ISO SMG and the AN-94 Assault Rifle. Both of these weapons are free and you can acquire them even without a Battle Pass!

It is safe to assume that the Battle Pass comes with the new Operator: Lerch as he is the cover for this Season 5. Past Season Battle Passes have their cover Operators as an immediate reward so we can expect the same to be applied this time.

Blueprints are unique skins that you can use to decorate your armory. With Season 5, a number of season-exclusive blueprints can be obtained if you get a Battle Pass.

The Battle Pass is an in-game economy system introduced to Modern Warfare 2019. When a new "Season" releases, players can unlock season-specific loot by playing the game and completing challenges.

Are There Lootboxes In The Game? Read To Find Out!

What Was Included In Season 4