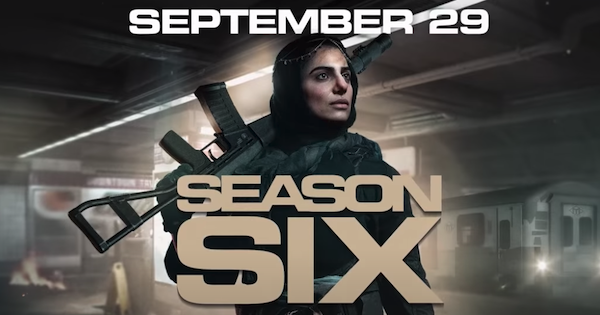 Price called in some friends.

Get Farah and Nikolai on your side when you pick up the Season Six Battle Pass for #ModernWarfare and #Warzone.

According to the game's official Twitter page, Season 6 launch is on September 29. Update time is assumed to be the same as that of previous seasons. Season 5 is set to end at that time as well, so hurry up to rank up fast before the current season ends!

Check out How To Level Up Rank Fast here!

Rank Up Your Season 5 Battle Pass

Make sure to complete leveling up your Battle Pass before the end of the season! Note that the Battle Pass contains Season-exclusive rewards. Reap the rewards in the form of blueprints, cosmetics, and even new weapons!

What Can We Expect In Season 6?

Just like past seasons, Season 6 will most likely have a new battle pass. Players will be able to progress through tiers by simply playing the game. Ranking up your tiers in the Battle Pass will unlock new cosmetic items, and even new weapons!

Season 6 brings with it new weapons for players to enjoy and kit out. A rumored weapon is the AS VAL, the weapon that Farah is holding in the Season 6 preview video.

Check Out The AS VAL Here!

2 new Operators will arrive in Verdansk. Characters in the main story, Farah and Nikolai, join the battlefield with both being unlockable through the Season 6 Battle Pass. Both Operators are set to join as part of the Allegiance's Chimera PMC.

Check back soon as this article will be updated as soon as more information is confirmed!

Click Here To Read Up On Lores Until Season 5