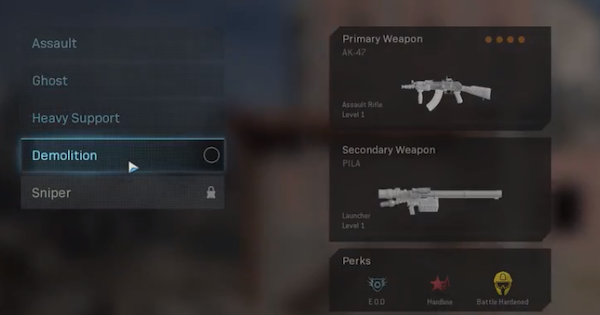 Demolition is the best recommended Default Loadout to use for beginner players. It has fun features without sacrificing versatility to face most situations.

Has A Reliable Gun

Demolition has a custom 4-attachments AK-47 Assault rifle that works reliably up to mid range. It can be depended upon to bring out damage in most situations.

Can Use Rocket Launcher

PILA can both be shot with guidance or not. It is a versatile weapon that lets players deal with both air and ground threats. Also fun to shoot into windows.

Has C4 For LOLs

Who doesn't like a remote-operated mega explosive? Jokes aside, getting C4 let players has more options in combat, such as defend key objectives remotely, deal with vehicles or clear rooms by throwing one through windows.

Ghost is the best recommended Default Loadout to use for quick play's stealth playstyle that requires sound experience and tactical sense to effectively out maneuver opponents.

A Decent Build That Can Be Very Mobile

Ghost loadout has a solid offensive capability in addition to being able to hide your presence from the enemy. A fast firing SMG, high damaging pistol, plus undetectable to electronics are a good combo when flanking.

Hides Death Markers Of Your Kills

The Tracker perk hides the death markers of your kills. As death markers are a big giveaway to your presence & position, the perk lets you ambush unsuspecting stragglers one after one for a high killstreak.

Good Handling Weapon With A Suppressor

Ghost Loadout's main weapon AUG - SMG has a good rate of fire and handling and is on par with most fast-firing weapons. It also has a suppressor attachment already pre-installed, giving you a quiet edge over opponents.

Undetectable To Most Digital Surveillance

Many killstreak emphasizes on detection, but with your Cold Blooded and Ghost perk, most digital surveillance will not detect you and show you on enemy HUDs. You can take positions without being exposed.

Why Use Default Loadouts?

Weapon Attachments are pre-installed when using a Default Loadout. Since Attachments require grinding weapon kill to unlock, you can jump into the fight better armed.

Some perks, tactical & lethal items actually require a higher rank to unlock, but is immediately provided to you in Default Loadout. Test them out to get a hang of each items.

There are total of 5 Default Loadouts: Assault, Ghost, Heavy Support, Demolition & Sniper. These are unlocked as you rank up, and they're still available even when you unlocked Custom Loadouts.

Burst Fire Is Great For Headshots

FR 5.56 has a 3-round-burst fire mode by default which the intervals between 3 shots is extremely short. This makes it a great weapon for targeting headshots.

Snapshot Grenade are great for confirming if an area is occupied. Save your frags until you confirmed there's tangos in the room.

Has Greater Freedom To Move

Ghost loadout has many perks that hide your presence against surveillance, and the main weapon has a suppressor, allowing you to move around the map easier.

Many Killstreak Abilities revolves around aircraft. Shoot them down with your M91 to get points and help your team.

A hilarious use to use your combo is to throw the mine, and then throw a decoy grenade near it when the enemy is approaching. It might trick them into your trap.

Gas Grenades causes slowed movement, blurred vision, and coughing, and also causes a smoke screen-like effect. You can give enemies attacking strategic corridors a headache by deploying it.

Leave Claymores To Cover Your Rear

Snipers, when looking for targets, are often sneaked up to from behind. Cover key doorways and your rear to prevent this.

High-magnifying scopes gives off a bright glare when aiming down scope. Look down the scope only when you're about to make the shot.