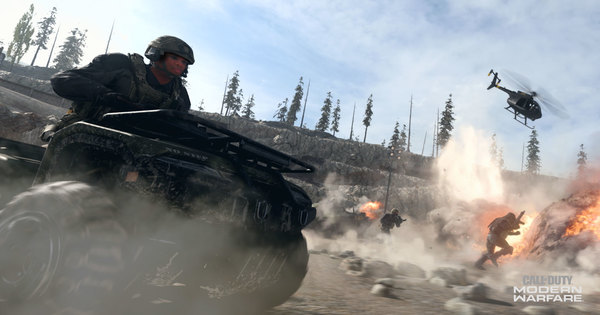 Guide to be effective with all vehicles in Call of Duty: Modern Warfare & Warzone 2021. Know available vehicles & tanks in Multiplayer & Warzone, skins, tips, and how to use them for effect and more!!!

The ATV is a small and agile vehicle that can seat two players at once. Keep in mind that this vehicle won't be able to transport your whole team, and does not offer much protection while being driven.

Use To Quickly Relocate

The ATV is a great vehicle to use when you need to quickly reposition. Being able to zip around will allow you to evade enemy fire, outrun the collapsing circle, or even just get to a far away objective!

The Tactical Rover is larger than the ATV, allowing you to seat your whole team. Despite having a bigger passenger capacity, its larger size will make it difficult to move through dense forests and tight alleyways.

The Tactical Rover possesses much more defense than the ATV, but still leaves you and your team exposed to enemy fire. It would be best to use this vehicle mainly for repositioning, rather than engaging the enemy.

The SUV is a large vehicle that is able to accommodate the whole team. It may not be able to traverse through narrow alleyways and forests, but is perfect for moving through urban areas such as cities. Due to the blue color of the vehicle, you may easily be spotted by enemies.

Despite having a slower top speed than the ATV & Rover, the SUV is able to offer much better defense since it only leaves the top half of the squad exposed to enemy fire. This vehicle will make you harder targets for enemies to lock on to!

The Cargo Truck is the largest of the ground vehicles, boasting the most defense, but is the slowest of the bunch. It only features a driver and passenger seat, but also has a large truck bed which your third squad member can use!

Utilize the Truck Bed to Adapt to Different Situations

The large truck bed of this vehicle gives you and your team several options. You can use it to transport vehicles as large as the Cargo Truck, or even use it is a partial cover when engaging enemies in fights!

If you want to cover more ground much faster, keep an eye out for helicopters in the map! These not only allow you to move quickly across the map, but also lets you move vertically, giving you access to building roofs and other high ground.

Cover the Most Ground at the Risk of Detection

Be warned that using the helicopter is a double-edged sword! Using this vehicle will allow you to move anywhere on the map, but also puts a large target on your back for enemy teams! Be ready to use several evasive maneuvers to keep safe!

What Are Warzone Vehicles?

Due to the sheer size of the Warzone map, vehicles provide an invaluable mode of transportation. These can help you cover more ground when looting, relocate to a better position, or even outrun the collapsing circle!

Each Vehicle Has Different Stats

Each vehicle will be able to offer you and your team varying degrees of speed and protection. Generally, larger vehicles tend to provide more protection while smaller ones offer more top speed!

Passengers of vehicles will be able to fire their weapons and use their equipment for utility purposes. However the driver will not be able to do this. Luckily, they can switch seats to quickly use equipment and fire, while another member can switch to the driver seat!

All of the vehicles listed above will be available for you and your team to use in both the Battle Royale and Plunder game modes.

Squad Mates Can Spawn On Heli

Squad mates will be able to spawn with you in the Heli, allowing your squad to move around the map quicker. They can choose to jump off the heli and get on the ground with a parachute, or stick with you until the chopper lands.

Use Flares To Avoid Missiles

When You've been locked on by launchers, pop flares (left click) to lure the missiles away from your chopper. Flares have a cooldown before it can be used again so try to avoid spamming them, and only use them when they are truly needed.

Crew Can Be Killed By Outside Fire

The heli is thinly armored and most rounds can go right through, not to mention the exposed sides. Keep moving to avoid getting focused on and plan your route of flight to avoid getting downed!

APC, IFVs both serve the same functions: A decently armored vehicle where allies can spawn in and exit. Treat it as a mobile spawn point with a grenade cannon to support infantry.

Troops exiting from APC, IFVs can then serve as respawn point for their respective squads, allowing a single vehicle to chain in a ton of troops to a location.

No Gunner To Cover Blind Spots

APC, IFVs does not support a gunner to help cover blind spots the driver isn't paying attention to, meaning it is easily flanked. Don't charge into unknown territory alone when driving one.

Don't let the "Infantry" in its name fool you - IAV cannot ferry troops effectively, as it can only seat 2 players - driver and gunner. It is built for assault rather than a transport.

Unlike its killstreak counterparts, map spawned IAV has no timer and can fight indefinitely. A skilled driver can rack up kills & points without worrying about time restrictions.

Use It To Flank Or Take Objective

The Tactical Rover is very fast and can carry a crew of 5, letting entire squads take enemy flanks or snatch objectives.

Tactical Rover is very exposed and have little armor. Exit the vehicle and take cover when taking fire or it's very easy to become a sitting duck.

What Are Ground War Spawn Vehicles?

Vehicles That's Limited To The Map

Ground War Specific Vehicles are vehicles that appears on each maps automatically. They are a part of the map design, introduced to add more action and mobility for players. Any players can commandeer them if they are unoccupied.

Has No Time Limit

Most Ground War Specific Vehicles does not have a timer limiting its operational duration, and can stay in the field as long as it's health isn't depleted. Once destroyed, it respawns after a while.

A gunner can sit atop IAV's turret and provide additional firepower with a .50 cal machine gun. He is more exposed however and can be taken out by incoming fire.

IAV can lay down suppressive fire against objectives and the enemies occupying the killzone around it. Use its cannon to blast out enemies from windows and openings.

The Wheelson can clear multiple warehouses with its nimble form and powerful cannon. It can also get into places a IAV will not be able to go through.

Chopper Gunner's advantage is that the player can control where the chopper goes, meaning it can relocate to provide support to those in need. A chopper gunner can wrestle a difficult objective from opponents easily.

Keep Eyes On The Skies

Threats may not only come from the ground - In ground wars, enemy infantry in Heli will sometimes attempt to attack your chopper from the air. Pay some attention to the aerial targets as well.

Gunship's numerous arsenal and the abundance of targets in Ground Wars means that the Gunship can get incredible amount of kills in a short while. It can break the team out of stalemate or further secure an advantage.

Use Flares To Counter Missiles

You'll sure to get a lot of hate - and missiles for being in a gunship. Use your 2 flares wisely to keep Gunship in the air for as long as possible.

May Be Difficult To Deploy

A whopping killstreak of 13 is required to call in a Gunship. Don't waste your killstreak slot if you're struggling to make past at least 8 killstreaks constantly.

What Are Killstreak Vehicles?

Killstreak Vehicles are all sorts of vehicles at your command earned through killstreaks. Most killstreak vehicle only lets you pilot them, while some allows for passengers. They can be so devastating that one can change the tide of battle.

Earn Through Scorestreak As Alternative

If completing Objectives and lending a supporting hand is more up your alley, you can consider taking the Pointman Perk to turn killstreaks into Scoretstreak - Killstreaks unlocked by scores earned.

May Sometime Get From Care Package

There's a chance you'll be able to get a higher tier killstreak from Care Package, which may include vehicles. What you can get varies from a personal radar to a gunship, but things you'll end up with is anyone's guess.

Mostly Restricted By A Timer

Killstreak Vehicles has a timer that dictates how long it can remain in the field. Even if its Health is not up, the vehicle self destructs or leaves the map if the timer ends. Choosing when to deploy a killstreak is crucial for its success.

We are currently confirming the vehicle skins in the game. Check back soon to find a list of vehicle skins!!!

Change the Look of Your Vehicles

Players will be able to change the look of their vehicle with vehicle skins! These skins take into effect when you are the first player in your squad to enter the vehicle. This will instantly change your vehicle's appearance depending on the skin you've set.

Whether in Warzone or Multiplayer, you will be able to set up your vehicle skins in the weapons tab. Clicking Vehicle Customization will allow you to choose each type of vehicle and set a corresponding skin!

How to Unlock Vehicle Skins

Unlock From the Battle Pass

Players who purchase the Battle Pass will be able to unlock Vehicle Skins. Level up the battle pass to the corresponding tier to unlock and use the vehicle skins!

Check Out the Battle Pass Here!

You will also be able to purchase vehicle skins from bundles at the in-game store! Make sure to review the contents of the bundle before proceeding with your purchase!

Check Out the In-Game Store Here!