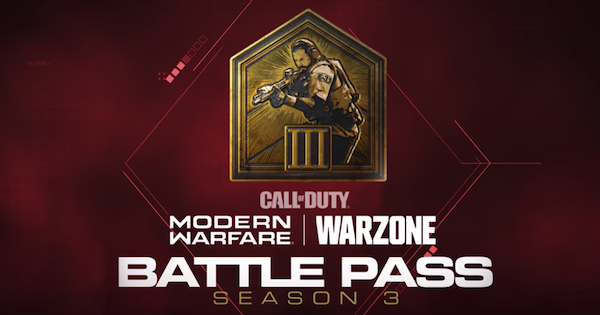 Guide for the Season 3 Battle Pass in Call of Duty: Modern Warfare 2019 (CoD MW) and Warzone. Including its price (cost), release end date, reset, tiers, how to level up, & rewards!!!

New! Season 3 Is About To End

Season 3 is ending soon on June 3! While season 4 is around the corner, it appears Season 3 will not be extended. Hurry up and finish up the battle pass tiers to get items in Season 3!

Season 3 is officially here! This new season brings with it new weapons, maps, Operators, game modes, and a new Battle Pass! Note that the Battle Pass itself features season-exclusive rewards, so you need to buy it first to get its unique cosmetics and weapon unlocks. The Battle Pass also now features more vehicle skins.

Click Here To Read Up On Lores Until Season 4

The Battle Pass can be purchased as a bundle, boosting the player up by 20 Tiers for 2400 CP. This extra boost is enough to unlock a new Season 3 weapon and several unique skins.

During in-game events, be on the look out for Battle Pass Double XP weekends or times. Use these periods and take advantage of them to quickly level up your Battle Pass.

Both Weapons Are Free

You do not need to buy the Battle Pass to get both of the new Season 3 weapons as they are free rewards. Just level up your Battle Pass to the specified tier level to get them.

A new weapon is also available as part of season 3 content, though its not unlocked with battle pass like other weapons. Instead, it is unlocked by completing in-game challenges.

Season 3 comes with 3 new Operators: Alex, Ronin, and Iskra. Alex is immediately available once you buy a Battle Pass, and Ronin and Iska will be available as Store-only Operators later.

The Battle Pass also gives out Mil-Sim skins based from their real-world counterparts as skins for the Default Operator.

Just like previous seasons, players may also be able to unlock new customization options such as emblems, calling cards, emotes, and more!

Past Season Rewards Not Earnable

Keep in mind that once Season 3 begins, you will not be able to earn any rewards from the Season 2 Battle Pass. If you have not yet completed the second Battle Pass, we recommend you get to grinding to earn all of the tiers and rewards!

What Is the Battle Pass?

Battle Pass is the in-game economy system introduced to Modern Warfare 2019. When a new "Season" goes live, players can unlock seasonal loot by playing the game and meeting challenges.

Season pass items are mostly cosmetics only, providing new fresh looks for different operators & weapons. Core updates like new weapons are available for everyone to unlock by tier progression.