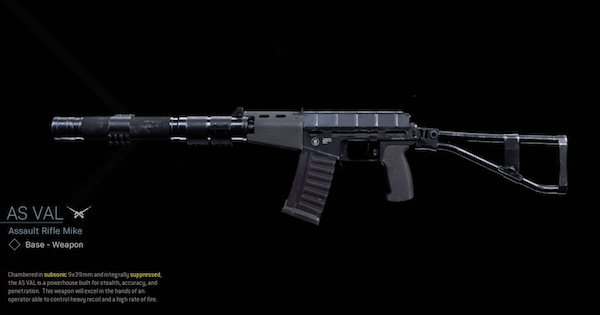 Check Out AS VAL Assault Rifle in Call of Duty: Modern Warfare & COD Warzone 2021! Find info on the Warzone / Modern Warfare best loadout, attachments, how To unlock, & setup for AS VAL!

AS VAL - Stats & How To Unlock

Snipe And Stealth Kill Up Close

AS VAL has good handling and a high fire rate that is effective up close but will suffer at longer distances, so we combined it with sniper or marksman rifles to min-max each weapon's pros and cons. Its built-in suppressor can let you handle targets in stealth.

Swat Out Weapons As You Need

If for some reason the match needs you to ditch one of your weapons for something with better attachments or a Grenade Launcher, you have the liberty to do so as you can swap between weapons fast thanks to the Amed perk. This gives you more utility in the field.

Attachment Setup For AS VAL

This loadout balances stealth, range, ammo capacity & handling into 1 easy-to use package. Players can use it to clear rooms & halls in Warzone to great effects but will require another weapon when dealing with ranged targets.

If you need an optic for longer engagements, swap out Tac Laser for your optics. We recommend a reflex sight such as Viper Reflex Sight so you don't lose sight of target due to the steep recoil.

This loadout will allow you to maintain stealth against most digital surveillance while hiding the skulls of targets you kill. As a added bonus, it also prevents you from getting blasted back to respawn by random explosives in the smaller maps of multiplayer.

Attachment Setup For AS VAL

Maximize AS VAL's ridiculous fast time to kill (TTK) by getting your sights on the targets fast! This loadout tries to maximize range & ADS speed so you can put crosshairs and rounds down target fast!

AS VAL - Compatible Attachments For Setup