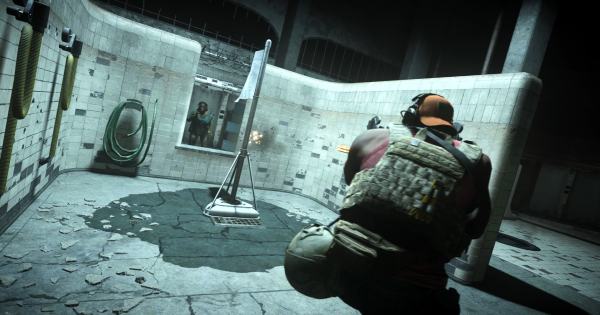 Read this Call of Duty: Warzone guide to learn more about how to survive the Gulag! Find out how to redeploy in Battle Royale mode, including fight tips, gulag rules, gulag gameplay tips & more!!!

Get Captured After Dying

Dying for the first time in Battle Royale will cause you to get captured and sent straight to the Gulag. Here, you will face off against other "captured" players in an attempt to redeploy back into Verdansk!

Only Available in Battle Royale

Keep in mind that the Gulag mechanic will only be available in Battle Royale mode. Dying in Plunder will not send you to the Gulag!

Win a 1v1 to Redeploy

The Gulag pits you against another captured player in a 1v1 match. The player to win that 1v1 match will be allowed to redeploy into the battlefield, and continue fighting in the Battle Royale.

Check Out How to Redeploy Here!

There Is A Time Limit to the 1v1

Keep in mind that there is a time limit to the 1v1. You will be given 15 seconds to eliminate you opponent. If no one is dead when the time reaches 0, a flag will spawn in the middle of the map. Either capture the flag or kill your opponent to win.

Can Only Redeploy Once

You will only be sent to the Gulag once. If you die again during the match, you will not be sent back to the Gulag. You will need to ask your squadmates to redeploy you at Buy Stations in order for you to respawn into the game.

Closes in the Endgame

After the 4th or 5th circle, the Gulag will close. You will be notified on your HUD when the Gulag will not take any more prisoners. This makes players in the endgame prioritize survival instead of running and gunning, knowing they can respawn if they're sent to the Gulag!

It is important to know the layout of the map when participating in a 1-on-1 match. This helps you keep your guard up and keep a watchful eye on potential blind spots. Map knowledge will also let you take advantage of cover areas, choke points, and the like!

Features tight and cramped spaces on either side. Not well suited to long range firefights. The center area provides tons of cover to run around when the overtime flag spawns.

Not much obstacles on either spawn point, which means rushing at the spawn points leaves no cover. Central area is a circular shower stall, which has two exits, allowing you to move in and out of cover easily.

Layout of this map favors close range fights more than anything else. Spawn points will feature a few shower stalls which you can use to kite the enemy, and for cover.

Strategize According to Loadout

The loadout you are given will be random each match. Check to see what weapons and equipment you are given, and plan accordingly.

Gulag Loadouts Are Now Drawn From A Pool (May 19)

After the version 1.21.1 update, Loadouts will now randomly choose from 6 ARs and 4 SMGs. It will be all automatic, no burst or single fire guns included. Familiarize yourself with these to gain an edge!

Your equipment, is just as important as your main weapon! You can chuck stun grenades at enemies to disorient them, or flush out camping enemies with frags! This is a great way to force them out of hiding spots, and give yourself the advantage!

If you ever find yourself watching your teammate's matches while waiting for yours, you can throw rocks at the enemy. Hitting an enemy with a rock will deal minimal damage, but also stuns them briefly, giving your teammate a brief window to capitalize.

You can also use your handy rocks to destroy any lethal equipment enemies have placed. These include Claymores, C4s, and even Mines! If you time it right, you can cause the equipment to explode when the enemy is near, giving your teammate the win!

Tag Enemies With Spray to Mark Them

While waiting for you match, use your spray to mark enemies in bright colors. This will make them stand out against the dull colors of the Gulag map. Having them in bright colors will allow you to easily spot them while fighting in the Gulag!