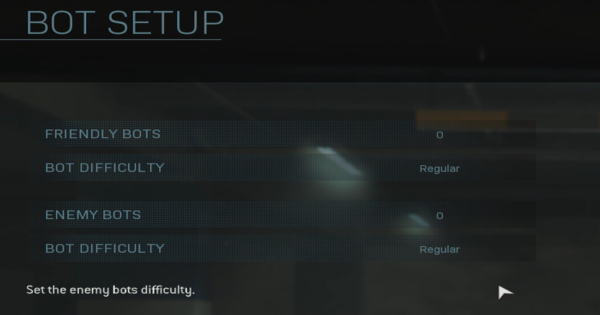 Read this Call of Duty: Modern Warfare (CoD: MW) & Warzone guide on how to easily set up an offline bot matches! Learn how to set up Bot Lobby, how to play with bots & get better!!!

Check Out the Beginners Guide Here

How to Set Up a Bot Match For Modern Warfare

How to Start a Private Bot Match Lobby

Head on over to the Multiplayer lobby where you will get the options to select a Playlist. Choose the "Private Match, Trials & Gamebattle" tab at the bottom of the playlist.

Once you've clicked on a tab, a new screen will pop up, asking you to choose between Custom Games, Trials, or Gamebattles. For Bot Matches, click on Custom Games.

Set Up Bots At "Game Setup"

Once you're in the Custom Games lobby, you can then customize the bots in the Bot Setup Tab in the Game Setup menu. Map, Game Mode, & Game Rules can also be edited here.

In the Game Setup menu, don't forget to tweak the map, game modes & Game Rules to maximize your practice or testing session. We recommend choosing a smaller map so there's plenty of target encounter, increase the match time limit and turn on "Skip infil" to save time when starting matches.

In the Bot Setup Tab, you can change the number of teammate and enemy bots and their behavior. The amount of bots you can add depend on the game mode you'll be playing, but the most is 11. You can also increase or decrease the difficulty.

How to Set Up Bot Match For Warzone

Warzone Bot matches are far more restrictive than Modern Warfare core modes. In fact, you cannot tweak anything at all as the Warzone's bot only match is more of a byproduct of training mode than a real Bot Match game.

Things You Can't Tweak In Warzone Only Bot Matches

How To Set Up Matches With Bot For Warzone

Go to the Warzone lobby and click on the bottom playlist "Practice Modes & Trials". This will bring you to another menu.

Click on the "Battle Royal Practice" to begin a match against bots in a controlled Battle Royale round. Here, you'll play a mock match of Battle Royale against AI opponents all at each other's throats. The Bot AI is somewhat easier than normal.

Battle Royal Practice is a restricted practice match against bots where you'll encounter circle collapse, free-for-all battle play and even contracts. It is always the same map where the match is fought on and all bots will kill each other, making it a mixed experience at best for bot matches.

Spawn With An X16

Similar to a game of Battle Royale, you get to spawn in with just an X16 Handgun. However, if you want to swap attachments or loadout mid-match, you'll still need to buy a Loadout Drop.

What are Bot Matches?

Bots are computer-controlled opponents that you can fight with or against. They follow a pre-determined algorithm to determine their behavior which varies by your settings & circumstances. They are great for target practice & gun, map training.

Check out How to Aim Better Guide here!

Can Only Add Bots To Specific Game Modes

Not all game modes can be played with Bots. There's only a select few that you can set up where you can play with Bots instead of other players.

Game Modes That Can Be Played With Bots

Does Not Add XP Or Unlock Gear

You won't be able to gain XP or unlock new weapons or attachments when playing against bots. Matches with bots are not considered multiplayer after all.

Great For Practicing, Trying Out Loadouts

Playing in matches with bots is a good way to practice and try out new loadouts before going into multiplayer matches. It's also a great way to familiarize with maps.

Does this work on PC?