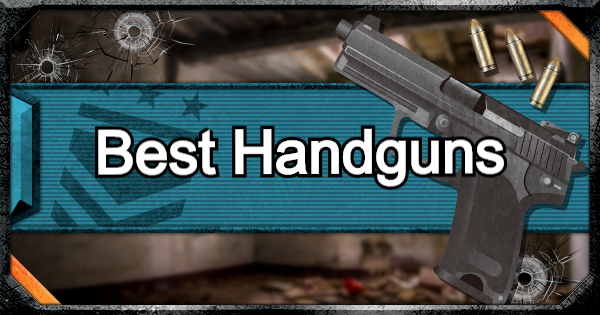 Read this Call Of Duty: Modern Warfare / Warzone guide to learn about the best pistol in the game! Find out the best season 6 handgun and pistol loadouts, attachments, and more!!!

S Rank is given to pistols or handguns that extremely easy to use. These handguns are trusty sidearms which you can switch to if you ever need to deal some quick damage for finishing off an enemy, especially in heated and drawn out fights!

The Renetti is an extremely customizable handgun, allowing you to tailor fit the weapon to behave the way you want. This versatility makes it a great secondary when you are fighting off multiple enemies.

The .50GS is one of, if not, the most powerful handgun in the game. It packs quite a punch, but has a slow fire, rate. Make sure to increase the weapon's accuracy, and practice aiming to get the most out of this gun.

Effective Up To Mid Range

The weapon is able to deal damage from close up to the mid range. If needed, you can swap to this weapon when you run out of bullets on your primary in order to finish the job!

On it's own, the .357 is an overall average gun, with decent damage and fire rate. However, its true potential is brought out by adding the Snake Shot and Akimbo attachments. This turns the seemingly normal pistol into a pocket shotgun!

The A Rank is given to weapons that are viable options. A rank weapons do not have the stats to rival the S rank weapons, but can be useful when attachments are added.

The X16 is the first sidearm that you will have unlocked. Despite it being available early on, it is a great pistol to have in your loadout. It's well-balanced stats make sure that you get the job done during firefights.

Can Hold Its Own During A Fight

The best handguns are able to hold their own during a fight. If you run out of bullets during an encounter, there is no problem with switching to your secondary to finish the job. These weapons can also take out an enemy single-handedly if ever a new enemy appears.

A pistol should also provide you with some mobility. This is to compensate for their lower damage output compared to your primary. Being able to move around will allow you to make yourself a harder target during fights!