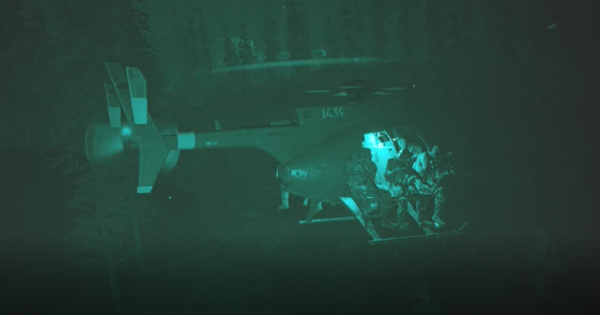 Check out All Operator Skins here!

Weapons In Mission 10: The Wolf's Den

DO NOT just spray through doors into rooms without the knowing who's inside first. You might kill a friendly or non-combatant.

7. Disarm Or Go Under Tripwires

Tripwires can be found in the tunnels, so watch where you move. Some can be bypassed by going under them (prone), or simply be disarmed.

Get Semtex For Disarm

You'll get a Semtex instead of normal frags for disarming tripwires here. They are useful for lighting up the dark and shutting down hallways.

The MG nest at the end of the hall is fortified and wont take much frontal damage. Instead, throw Flash Grenade first to shut them down and then move along the tunnels, so you can flank them.

13. Push The Railcar To Gain a Footing

When the flames are lit, push the rail cart under the stairs so you have something to step on to move up.

You won't have to worry about collateral damage to civilians with shotguns in the tunnels, and its devastating close range bursts can burst down enemies faster. Pick one up along the way.

14. Use Handgun While On Ladders

You can use your handgun to defend yourself while you go up ladders. You will need it here as an enemy will try to jump you.

It can be confusing when you fall off as Farah holds on to you since no commands will prompt. Spam Jump command to be pulled up during this phase.

16. Cut Wires Only After Farah Tells You To

Farah will have a specific "Cut!" command telling when to cut the wires. Don't cut before she issues the command or the bomb will go off.

The Wire Sequence are: