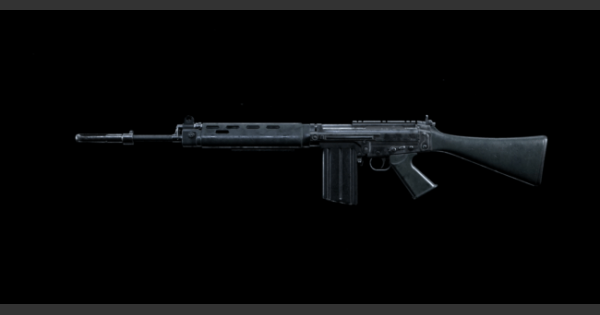 FAL - Stats & How To Unlock

The FAL can be used as an accurate rifle to take down enemies from a distance. Its semi-automatic fire is highly-damaging and if well-placed, is enough to eliminate targets with just a few shots. However, fighting in close quarters can be difficult.

Double Time allows you to sprint further as it effectively doubles your sprint duration. The High Alert also keeps you aware of any possible shooters while moving.

Check Out Other Perks Here!

The FAL can shoot bullets as fast as you can press the button and with high accuracy and recoil stats, plugging in attachments can help it become a semi-auto marksman rifle. This kit is very useful when fighting in open areas and plains.

FAL For Range, MP7 For CQC

This kit takes advantage of the FAL's power when used from mid to long distances. It also compensates the AR's weakness by loading out an MP7 for close encounters.

Check Out The MP7 Here

While a lot of players might diss the FAL due to its semi-automatic fire, plugging in a Burst Perk greatly increases its damage output as a single burst is enough to eliminate a target. Attachments for accuracy and recoil management also furthers the gun's already exceptional stats.

Hailing from a design that was first put to service in 1953, the FAL is a modernized version of the famed Battle Rifle, using a semi-automatic fire mode. High RoF makes this a great weapon for pumping shots to mid-long range target.

Jason is a hero

Ive been maining the FAL since i got the game 3 days ago and i have to say its pretty great, almost a marksman rifle with the rof of an ***ault rifle.