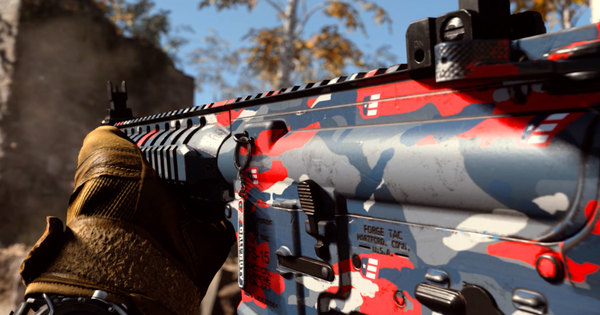 Check out this guide to see all weapon camo (camouflage) in Call of Duty: Modern Warfare & Warzone 2021! Know each camo category, appearance, how to unlock & equip camo, & more!!!

Spray Paint challenges are straightforward, requiring you to get kills with the weapon. These challenges are usually the first that unlock. Note that some weapons may require different objectives. Make sure to check in-game descriptions!

Woodland camo will often need headshots with the weapon to unlock. Note that some weapons may have different criteria, so always check the in-game descriptions.

Get Kills While Crouching

Digital camo is mostly unlocked by making kills while crouched. Using the Double Time Perk lets you crawl almost as fast as you walk, making this challenge easier.

Drago Camo would would demand the user use hip-fire to kill opponents. Use attachments such as lasers to expedite the process.

Splinter Camo is mainly about making Longshots, which are kills out in the distant. A good optics can let you acquire targets further out easier.

Kills Made With The Weapon Mounted

You'll need to make kills using the new "Mount" mechanics which stabilizes your weapons on terrain obstacles, but immobilize you.

Make kills while filling all 5 attachment slots on the weapon to unlock Tiger camo. Experiment with different weapon customizations while you're at it!

To unlock Stripes Camo, you'll need to make double kills, which are 2 kills made in a very short time between each kills. It may be easier to achieve in smaller maps..

Go Back To The Roots & Kill Without Attachments

Reptile camo will bring the player back to square one - make kills with no attachment on the weapon. Retrain yourself to fight with the weapon in its basic form!

The Skulls camo will require you to show off your prowess by dominating enemies - Kill 3 enemies without dying yourself. Prioritize staying alive if you're aiming for this camo.

The Epitome Of Achievement

Completionist Camo is the top-dog tier of weapons camo, requiring the player to get every single camo for a weapon, and others. It is divided between Gold, Platinum, Damascus camo,with increasingly difficult criteria to meet.

What is Weapon Camo?

Unique Cosmetics For Your Weapon

Weapon Camo are unique appearance-altering skins for your weapons. You can choose between ones that will increase your concealment, or ones that shows off your personality!

Camo Separate For Each Weapon

Weapon Camo does not carry over to other weapons and must be unlocked separately. What weapon camo you unlock for M4A1 will not apply to another weapon, and vice versa.

How To Unlock Weapon Camo?

To unlock weapon Camo, you must first raise your weapon level to unlock each camo category first. Raise weapon levels as priority.

How To Level Up Weapon Levels Fast

Complete Challenge For Each Camo Category

Each Camo Category has a distinct unlock criteria that must be met to progress and unlock more camo. Conditions vary from simply making kills to requirements such as headshots or kills made while crouching.

Only when the camouflage category is unlocked, will your progress be counted for each camo within. For example, only the kills you make after you've unlocked Spray Paint camo category count toward its objective.

No Need To Switch On For Camo Challenge

Unlike mission challenges, Camo Challenge don't need to be turned on for the progress to be counted. Simply use the weapon for progression.

Check out All Challenges Guide here!

Progress Only Earned In Multiplayer

Only the weapon progress in Multiplayer Mode counts toward the objective. Any other modes won't be included, so play Multiplayer exclusively to unlock Weapon Camos.

How To Equip Weapon Camo

Weapon Camo can be accessed through Gunsmith interface of each weapons. Go to Custom Loadout first to access Gunsmith, which will require Enlisted rank 4 or higher.

Click Customize Tab on the top-left corner of the screen to switch to cosmetic-related changes.

To equip or alter weapon camouflage, click the Camouflage icon on the bottom left of your screen.

Choose a Camo Category you have unlocked. Each category has their own unique themes.

Equip A Camo You Have Unlocked

Double-click on the camo icon in the category to equip it. You must meet the challenge and unlocked that weapon camo in order to equip it.

You dont have camo lists for launchers and melee weapons