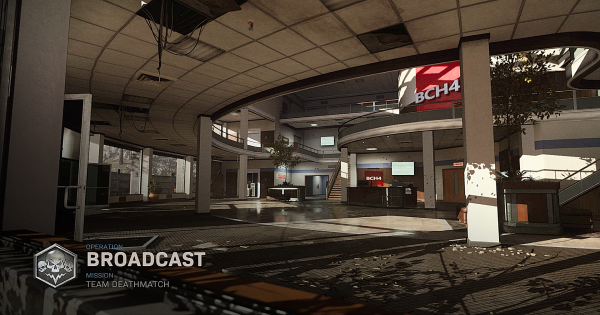 The broadcast map consists of two different areas, the building's interior and exterior.

The building's exterior is much more open than the interior. Despite this, the area is littered with several cover options such as half walls and bushes. There will also be small buildings which you can turn into sniper nests.

It would be best to pre-aim your guns before turning corners, especially when inside buildings. This will allow you to be ready should you run into an enemy sprinting down the hallway!

Use The Building's Second Floor

The building's interior will feature a second floor which you can use to gain the height advantage against enemies. There will also be half walls which you can retreat to should you sustain a big amount of damage.

Roof Has A Vantage Point

The building's roof has a hole which you can use to peek inside the building's first floor. If there are enemies in the room, you will be able to quickly jump down, and eliminate them!

Move From Cover To Cover

The outside of the building is very open. It would be very easy for someone using a sniper to spot you and pick you off. It is recommended to move from cover to cover and use your tactical sprint to quickly reposition, and avoid getting hit.

Use Small Buildings As Snipers Nest

The small buildings found just outside of the broadcast center can be turned into sniper nests. These areas provide tons of cover, and even allow you to mount your weapons for added stability.

Broadcast makes its return as a playable map in Season 6! This larger map will host core game modes, and is known for its interior and exterior map design! Fight in an abandoned broadcast center!