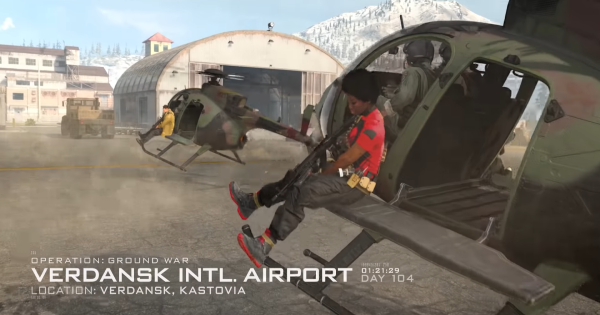 Verdansk is a large map specifically for the Ground War game mode. This massive map features large open spaces and massive buildings with relatively open interiors. Expect a variety of combat situations with the different areas on the map.

Vehicles Available For Use

Due to the large size of the map, Verdansk Intl. Airport also offers a variety of vehicles such as an ATV, an IAV, and and SUV to help you move around the map faster!

The large buildings found scattered along the map have relatively open spaces. Some of them are also multi-tiered with several upper levels. This can give you the height advantage against enemy units fighting on the ground.

Aside from the buildings, the exterior of the map features long winding roads, with a few cover options. These spaces are favored by snipers especially since it is easy to pick off an enemy at range.

The large map requires you to bring a versatile loadout in order to be ready for a variety of combat situations. Below are some suggestions on the different types of loadouts you can equip.

Check Out The Best Loadouts Here!

Use Overkill For Multiple Primaries

The Overkill perk allows you to carry two different primary weapons in your loadout. You can equip a both a close to medium range weapon, and a long range weapon in order to cover the most ground when engaging enemies!

Check Out The Overkill Perk Here!

Bring A Launcher For Vehicles

Players can also opt to have a launcher in their loadout. This is to help them easily deal with enemies using armored vehicles such as IAVs in the field.

Aside from offense, players should also prioritize defense in order to survive long enough to capture objectives. Tacticals such as the Stim or the Decoy Grenade can help you quickly heal up, or distract enemies enough for you to sneak past!

Travel Through The Sides

The hot zones for combat are usually found near the different objectives, or at the dead center of the map. If you want to safely get from one point to another without using a vehicle, it is recommended to stick to the map's borders as little to no enemies are found here!

Watch For Enemies In Buildings

Enemies may set up shop in one of the many buildings found in the map. Be careful when passing by as enemies may be taking aim at you from one of the windows. Move from cover to cover to evade the line of fire!

Use Vehicles To Dominate Infantry

Use the vehicles scattered around the map to rain down heavy firepower on foot soldiers. These vehicles work best with multiple passengers so make sure to bring your squad along. However, be careful of enemy mines and rocket launchers!

The Verdansk Intl. Airport is a new map that looks like it's large enough to allow for players to pilot different vehicles such as tanks. These maps might feature tons of open spaces, so make sure to find cover or else, you are an easy target!

Similar to maps like Port of Verdansk and Zhokov Boneyard, Verdansk International Airport is already a place you can visit in the large open-world of Verdansk. In Warzone, this place is considered a hot zone due to it inviting lots of players as it houses powerful loot and weapons.

Check Out The Verdansk Map Here!

Verdansk Intl. Airport was featured in the latest trailer for MW / Warzone's season 5. It showed several players fighting in the map whilst piloting different vehicles.