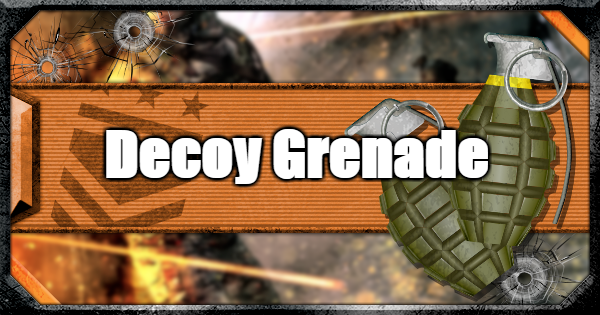 Read this guide to learn about the Decoy Grenade Tactical equipment in Call of Duty: Modern Warfare 2019 & Warzone! Find out how and when to use, gameplay tips, tricks, and more!!!

The Decoy Grenade is a great way to trick and easily take down enemies! By creating fake gunfire and radar signatures, you can use it to flank unsuspecting enemies who are investigating the commotion!

The Decoy Grenade will start to create noise which imitates gunfire, drawing enemy attention to its location.

In addition to the noise it creates, it also sends out a radar signal which will be displayed on enemy minimaps. This is also useful as it further helps in tricking the enemy that there is a nearby presence.

Expires After a Certain Amount of Time

Keep in mind that the Decoy Grenade will only function for a certain amount of time. It will then stop making noise and emitting radio signals after the timer expires.

A great way to use the Decoy Grenade is to use it near enemy objectives. This will trick enemies that there is someone near their objective and will rush to defend it. Use this opportunity to clear the area of careless enemies!

Throw Out of Enemy's Line of Sight

To increase the Decoy Grenade's effectiveness, throw it out of the enemy's line of sight such as corners or inside rooms. This way, enemies will not see that it is a grenade until they approach the area to investigate.

Use In Conjunction With Traps

Another way to use the Decoy Grenade is to use it in conjunction with traps such as Claymores, Mines, and C4s. Attach the trap near the Decoy Grenade so that enemies that investigate will get caught in the blast zone!

Use After Your Counter UAV Expires

To get the most out of the Decoy Grenade, try to use it once your Counter UAV killstreak expires. This way, enemies will be able to see the radar signal that the grenade emits along with all the noise it's making.

Check Out the Counter UAV Here!

What Is Tactical Equipment?

Gain the Advantage During Encounters

Tactical Equipment can be used to give you the upper hand during different situations. These do not necessarily damage enemies, but can disorient them, or even heal you to increase your survivability in matches.

Leveling up your ranks in CoD: MW and Warzone will unlock various tacticals that you can use in various multiplayer game modes! These include Perks, other equipments, weapons, and more!