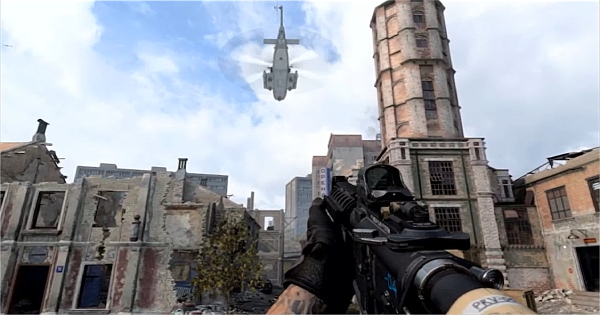 Read this guide to learn about the Support Helo Killstreak in Call of Duty: Modern Warfare 2019 & Warzone! Find out how and when to use the Killstreak, gameplay tips, and more!!!

This killstreak summons a chopper that patrols the entirety of the map. It automatically tracks targets and uses its turrets to fire on enemies as long as they are in the chopper's line of sight!

The Support Helo will patrol the entirety of the map and will fire at targets in its line of sight. Once it sights a target, it will unload heavy firepower onto the enemy quickly killing the target.

After the Helo fires its barrage of bullets, there will be a brief pause before it starts firing again. If it sights multiple enemies, it may not be able to kill all of them because of the brief pauses in-between sprays.

Flies Close to the Ground

The Support Helo flies close to the ground, this makes it an easy target for enemies with powerful weapons such as launchers and powerful LMGs! Enemies may be able to focus fire on the Support Helo to bring it down!

Use In Open Maps

It is recommended to use the Support Helo killstreak in open maps, with little to no overhead cover. This way, your Helo will be able to target more enemies since it does not fire at enemies outside of its line of sight.

The Support Helo is also an excellent killstreak to use in smaller maps as it has less ground to patrol. This also guarantees that enemies will constantly be in its line of sight as there are less places to run and hide!

Use The Helo As A Decoy

The Support Helo can become a high priority target for enemies since it is a large target and flies relatively close to the ground. You can use the Helo as a decoy and easily dispatch enemies preoccupied with your killstreak!