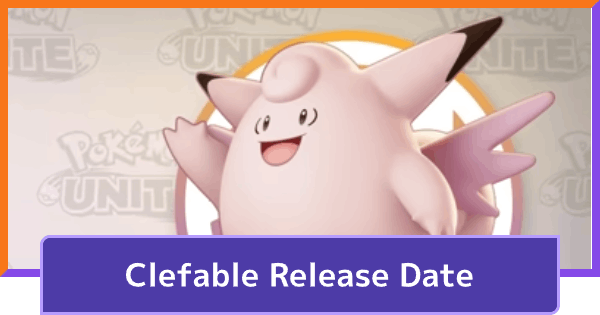 Announced To Join This October!

After first appearing in the Pokemon UNITE announcement video last June 2020, Clefable is officially confirmed set to come to Unite this coming October 13! After Clefairy was also highlighted in the new Pokemon Spotlight, a first on which a pre-evolution form is also revealed. It is said that these Fairy Pokemon can harness the power of the moon.

Clefable's Unite License price is not yet revealed so stay tuned for upcoming news regarding this.

Clefable will be the next supporter and specializes in assisting other allies by inflicting status conditions on enemies and providing healing or buffing teammates.

Can Dash Forward In Any Direction

Clefable can rush towards its target with its dash ability. This gives it enough mobility to use when chasing enemies or may be utilized as an escape tool from pursuers and disadvantageous situations.

Similar to other support-type Pokemon like Wigglytuff and Blissey, Clefable seems to be able to use Pound as well to deal damage to its targets. This looks like it might be one of its initial damage-dealing moves that might come in handy in the early stages.

Has Wide Area Of Effect

Clefable can create a wide area of effect that may be used against multiple Pokemon at once, especially on clashes when both teams fight against each other. A small moon also appears as the move ends and the clouds surrounding lightens.

Surprisingly, Clefable can onslaught its opponents with powerful punches to knock them out like Lucario's Close Combat.

May Provide Heals Or Buffs

Clefable summons a green light to itself and its ally that might be a buff or an HP recovery effect. It was used before Clefable attacked so it may be also a buff that increases move attack damage.

What Kind Of Pokemon Is Clefable?

Introduced As A Fairy Pokemon In Generation I

Clefable is said to be one of the world's rarest Pokemon out there and rarely had it was seen as it always flees when it sense someone is approaching. Furthermore, Clefable is also extraterrestrial in nature aside from it being a Fair-type Pokemon with cute moves.