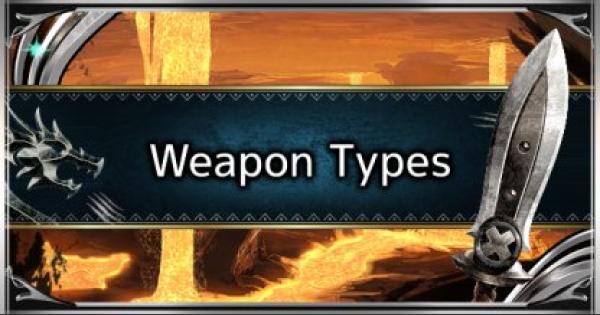 Check this Monster Hunter World: Iceborne guide on all the weapon types in the game. Know each of their unique abilities & characteristics, skills, and more!!!

Wield A Variety Of Weapons With Unique Play Styles

Choose from any of the 14 weapon types to wield when out hunting in Monster Hunter World. Each one offers a unique play style, different ranges, and strengths & weaknesses.

These types of weapons are basically melee weapons that lets you deal damage when up close & personal! Each weapon type under this category has a unique play style featuring a wide variety of attacks. Melee weapons also lose sharpness, and should be sharpened with a whetstone.

Ranged weapons on the other hand lets you dish out damage from afar, but consumes ammunition. Each type of ammunition also has different effects & power.

Your weapon of choice determines your defensive characteristic, either as "Blademaster" for melee weapons or "Gunner" for ranged weapons. Blademasters receive less physical damage, while Gunners receive less elemental damage.

Slow and powerful, the Greatsword is a big deadly weapon that deals a huge amount of damage up close!

Time the tackle attack to prevent knockback from attacking monsters to let you perform uninterrupted combos.

This weapon type is characterized by fast fluid slashes & combos.

Charge Up Your Spirit Gauge

Unique to this weapon is the ability to accumulate Spirit Gauge to boost your attack power. This can be increased up to three levels. Perform a Spirit Roundslash to charge up the Spirit Gauge.

A mix of offense & defense, this weapon type features good attack speed which makes up for its low attack power.

Use Items While Weapon Is Drawn

Unique and the ability to use items even while the weapon is drawn without having to sheathe them.

Depending on the terrain you are at, you can trigger different kinds of combo strings from the Advancing Slash attack.

Unique to this type is the Demon Mode, which changes its entire moveset, at the cost of constant stamina drain.

When landing attacks in Demon Mode, you fill up your Demon Gauge. When this gauge is full, you can activate Archdemon Mode, which allows you to perform other special attacks!

A powerful, massive weapon that can stun monsters and break hard monster parts! Despite its size, it features decent mobility.

Charge Up Your Damage With Power Charge

You can charge up your hammer with the Power Charge to boost its attack power. The effect will only be removed once you sheathe your weapon, or when taking damage.

Stun Monsters By Hitting Them On The Head

You can stun monsters with the hammer by hitting them on the head with a Charged Upswing attack, or Charged Brutal Upswing.

For players who love to play support role, the Hunting Horn is recommended! It is a versatile weapon that allows you to deal blunt damage, while being able to buff the party with various positive status effects!

Use Performances to Boost Party

Hunting Horn melodies are called "Performances" which are used to buff up the party.

The first performance emits a shockwave with high attack and stunning power, which is a viable attack starter.

A great defensive weapon, the Lance features thrust attacks while being able to take on minimal damage.

Use Power Guard to Minimize Push Back

Power Guard diminishes pushback during a guard reaction, and allows you to peform a quick counterattack.

Combine and mix up your Dash Steps & Guard Dashes to be able to keep a close range to the monster while maintaining offense!

Similar to the lance, but more focused on offense, thanks to the addition of of powerful shelling attacks.

You can negate a monster's resistance and deal fixed damage using the Gunlance's shelling attack.Just make sure you have enough sharpness to perform this attack!

Does Not Consume Ammo

Unlike Bowguns, the Gunlance does not use up ammo when performing Shelling attacks. Each Gunlance uses a different type of Shelling so experiment with the different options!

The Switch Axe is a versatile weapon that can change between axe and sword mode, allowing you to change your approach on the fly!

Switch to the Axe Mode to deal powerful attacks at long range. This also charges up your Switch Gauge.

Use Sword Mode To Utilize Phial

Attacking in Sword Mode utilizes the effect of the Switch Axe's phial, making it valuable for targeting tough monster parts.

Land enough attacks on Sword Mode to use Amped State, which boosts your attack power greatly.

The Charge Blade is a versatile weapon that allows you to switch between a sword & shield, and a powerful axe. You can store up energy into phials and unleash them for a powerful finisher!

As you wield the weapon in sword mode, you charge up your phial to charge either your shield or sword. Charging the Axe will allow you to unleash a powerful Axe attack.

Attacks when phial effects are active are harder to deflect, which is useful to target tough body parts.

When guarding through a monster attack, the guard reaction can be chained to a counter attack.

A versatile weapon that allows you to vault & perform jumping attacks at any time. This weapon also allows you to control a Kinsect which harvests extracts from monsters to give you a boost.

The Insect Glaive also allows you to perform midair attacks and evasive maneuvers. While mounting a monster, you can jump off and perform another attack.

Check Out How To Mount A Monster

The light bowgun features great mobility and evasive capabilities, and fast shooting. However, unlike the Heavy Bowgun, it has a smaller ammo capacity.

Both Light and Heavy Bowgun can be equipped with custom mods, that can enable automatic blocking, shorter reload times and more. Same mods can be applied multiple times for an even better boost.

Unique to the light bowgun is the ability to use Wyvernblast, which are basically landmines. These can be set off by monsters, or shot at to trigger an explosion.

The Heavy Bowgun can fire more powerful ammo compared to the light bowgun, has reduced recoil and larger ammo capacity. However, this weapon has a slower reload and movement.

Equip Custom Mods At The Smithy

As with the light bowgun, you can also boost its traits with custom mods.

Use Wyvernheart To Dish Out A Continuous Barrage

Unique to certain Heavy Bowguns is the ability to use Wyvernheart, which basically turns your Heavy Bowgun to a machine gun. Use this to deal continuous massive damage on a monster!

As with Wyvernheart, certain Heavy Bowguns can use Wyvernsnipe which turns your weapon into a sniper rifle. Use this for powerful precise shots!

The Bow is a powerful mid-ranged weapon that can target specific monster parts. It can use Ammo Coatings to increase raw attack power or inflict status effects. It can also deal more damage with Charged Steps & Shots.

You can also coat your arrows with different coatings to increase attack power to abnormal status on monsters.

The Bow's Dragon Piercer move is incredibly powerful. It has the capacity to unleash an extreme amount of damage to its target as long as all of its shots connect.