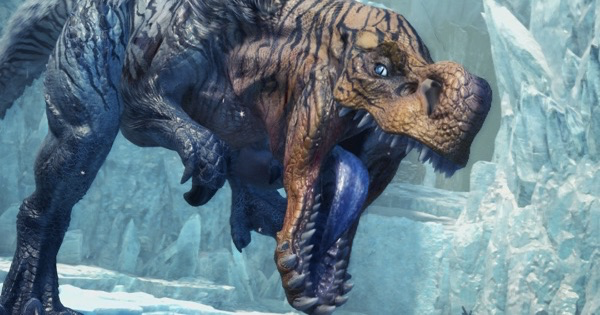 The Fulgur Anjanath is a lighting-element subspecies of the Anjanath. It's a new monster in Iceborne and delivers powerful attacks with lighting-based elements.

Appears In All Locales

Though first introduced with Hoarfrost Reach, the Fulgur Anjanath can appear in all of the game's locales.

Has A Weakness To Ice In Normal State

The Fulgur Anjanath has a weakness to Ice Element. If you have an Ice weapon, it is recommended to use it for the fight. Use your Ice Weapon in conjunction with the Ice Attack skill to maximize your elemental damage output against the monster!

It is recommended to equip a loadout that will increase your resistance to the thunder element. With a higher resistance to thunder attacks, you will be able to lessen the damage taken from most of the Fulgur Anjanath's attacks!

The Fulgur Anjanath will have a higher chance of being toppled if you wound or break its legs. Use your Clutch Claw or use Partbreaker skills to damage and break its legs.

Check Out How To Use The Clutch Claw!

Utilize Turf War With Other Monsters

Fulgur Anjanath is very aggressive and can down you with a well-placed physical attack. When another monster approaches, make use of Turf Wars to deal extra damage.

Fast Recovery when Flinch Shot to a Wall

Fulgur Anjanath has one of the shortest recovery time when shot to a wall. Better prepare to defend because it will attack when it gets back on its feet or become enraged.

The Fulgur Anjanath is weak in 2 spots: its head and tail. Both of these areas are breakable, with the addition of its hindleg claws.

Fulgur Anjanath charges itself when enraged, making itself faster and capable of dealing stronger damage. The frequency of its Thunder Breath also increases in this state, so be extra vigilant when fighting a charged Fulgur Anjanath.

The Fulgur Anjanath's spin attack has a wide range due to its tail. When it telegraphs this attack by raising its tail, dodge backwards to avoid getting hit by its tail. Alternatively, you can opt to block the attack if you are able.

Move To The Side To Dodge Side Slam

The Anjanath will often do this move. The attack has a wide range as the tail has a chance to hit you when it rushes toward you. Make sure to dodge away a great distance to avoid getting hit by this attack's large hitbox.

The Fulgur Anjanath will telegraph this attack by rearing its head back and opening its mouth wide, making it easy to dodge. However, it may do this attack successively so keep an eye on the monster after dodging.

One of the more powerful attacks of the monster, this not only does damage, but it can inflict Thunderblight, too. Be sure to roll away from the monster to avoid getting hit by this wide-ranged attack.

Despite being a ranged attack, the Thunder Breath is only a small projectile that can be dodged easily. However, make sure to avoid its point of impact as it can become electrified and deal damage to you!

If you do not have a thunder weapon, you can opt to use water weapons to deal damage!

This needs to be edited.