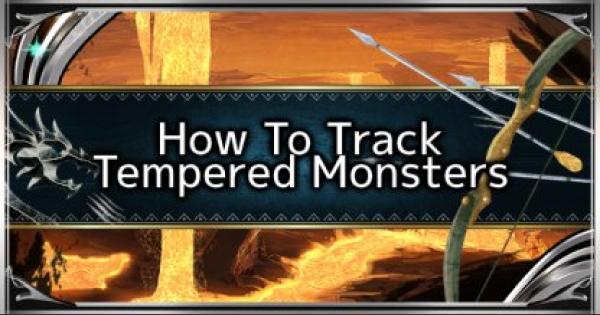 Check this Monster Hunter World: Iceborne guide on how to track Tempered Monsters and how to get their Investigations Quests - including traces, threat levels, and rewards!!!

Check Out What Are Investigation Quests!

What Are Tempered Monsters?

Tempered monsters in Monster Hunter World are powered-up, more dangerous versions in the game. You can tell it is a tempered monster when their icon is outlined in "purple".

Activate Investigations Quests For Sure Encounters

The only surefire way to encounter tempered monsters is to activate quests that need you to hunt them. Collect tempered tracks (traces) that you see in the field & check the Resource Center for investigation quests.

When you pick up any tracks (traces) of tempered monsters, it'll inform you of its threat level. The higher the threat level, the higher it is in the monster hierarchy, & definitely more dangerous.

How To Get Tempered Monster Investigation Quests

Check Out How To Track Large Monsters!

Get Random Investigations When Gathering Tracks

After gathering tracks, head back to Astera and go to the Resource Center. Activate the investigation quest with the monster that you want to hunt and then head to the quest board to accept the quest.

How To Track Tempered Elder Dragons

In MHW, tempered Elder Dragons also exist and the best way to find them is to collect their tracks (traces) in regions where you can find them. Then, check your Resource Center if you have the corresponding investigation quest to hunt them.

When you hunt tempered monsters, you'll receive more weapon & armor decorations or jewels. These items are important in making your loadout more powerful against certain monsters.

Get Streamstones For Melding & Augmentation

A random quest reward you can get for hunting tempered monsters are streamstones. These are valuable materials needed in melding high rarity decorations and augmenting weapons & armor.

Check Out How To Augment Weapons & Armor!

Tempered quest rewards you with more money than normal quests, this is due to the difficulty of defeating these powerful monsters.