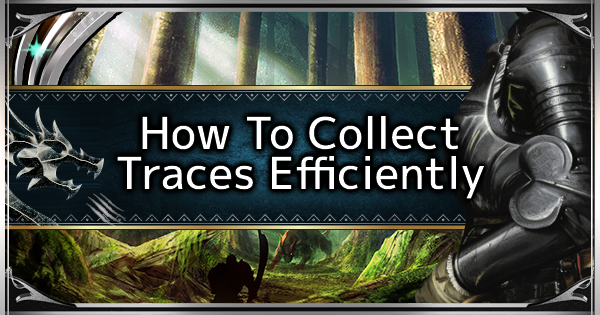 How To Collect Tempered Tracks Fast

How To Collect Quest Tracks Fast

The most efficient way of collecting Elder Dragon tracks (traces) will be going into the ★9 Event Quest "Tracking the Delivery". Even if you don't complete the quest, you can explore the area and gather as many tracks that you can find.

In this method, you just need to walk around and follow Kirin without attacking the Elder Dragon. As it walks, it will drop Elder Dragon tracks that you can simply pick up and collect.

Stones Are The Best To Use

There are plenty of stones you can gather in the field when doing this method. Plus they stack up to 20 pieces so you don't have to keep gathering them after just a few shots.

You need to shoot the stones as soon as your Scoutflies act up and follow the moving Teostra. Doing so successfully will make the Teostra drop traces that you can pick up.

4. Wait For Nergigante To Drop Tracks

Method Is Easier Than Tracking The Kirin

In this method, you don't have to continuously follow the Elder Dragon, unlike the Kirin method. This makes it easier for you to collect Nergigante's tracks during the quest.

One of the best methods of gathering tempered monster tracks (traces) is posting the ★9 Event Quest "A Simple Task". The area will be full of tempered tracks that you can pick up and add to your Investigations.

Following an Odogaron in Rotten Vale is one of the most efficient ways to gather tracks of tempered monsters. It is time-efficient as traces are near to each other and will be plenty in the area.

3. Collect Monster Tracks In Each Map

You can also gather tempered monster tracks by gathering traces of your target monsters in each map. For example, you can get a tempered track of a Diablos in Wildspire Waste or a tempered trace of Odogaron in Rotten Vale.

How To Collect Quest-Specific Monster Tracks

One of the best ways to search for tracks is to check the map and see if that monster will spawn in a specific area. Most tracks appear in the same areas so keep them in mind when you're searching for traces.

How To Collect Pink Rathian Tracks

Can Be Freely Gathered In All Areas

Pink Rathian tracks can be freely gathered in the Ancient Forest, Wildspire Waste, Coral Highlands, and Rotten Vale as long as you're at that part of the main story.

The best place to check for Pink Rathian tracks would be Areas 1 and 2 of the Rotten Vale. These are near camp so you can gather tracks fast then restart the expedition in a quick manner.

How To Collect Deviljho Tracks

To unlock the Deviljho Special Assignment quest, you need to complete the ★7 main story quest "An Old Monster In A New World". After doing so, you'll be able to spot the Deviljho in some of your expeditions & hunts.

If you want to find the Deviljho, you need to open your map and find the "???" indicated in the monsters chart. If you don't find this symbol, just restart until you get it.

How To Collect Nergigante Tracks

Once you've cleared the ★7 main story quest "An Old Monster In A New World", you'll gain access to the Elder's Recess. You'll be tasked to look for Nergigante traces but be sure to go back to camp to initiate the appearance of the tracks.

The appearance of Nergigante tracks is random. They mostly appear in Areas 2-8 and Area 11. It's best to check Area 9, then 12, 11, then 7. You'll only get a few tracks when searching so you may need to repeat expeditions or hunts.

How To Collect Kushala Daora Tracks

Talk To The Huntsman To Unlock Kushala Daora Quest

After completing the Nergigante main story quest, head back to Astera to talk to The Hunstman. He'll unlock the Kushala Daora quest for you.

You can find Kushala Daora traces in Areas 4 and 5 of the Ancient Forest. These are the best places to search for them.

How To Collect Teostra Tracks

After completing the Nergigante main story quest, head back to Astera to talk to the Commander. He'll unlock the Teostra quest for you.

You can find Teostra tracks in the Wildspire Waste. Head to Area 6 and then Area 8. These two areas are best for looking for Teostra traces.

How To Collect Vaal Hazak Tracks

After completing the Nergigante main story quest, head back to the Research Base to talk to the 3rd Fleet Leader. She'll unlock the Vaal Hazak quest for you.

Head to the Rotten Vale to gather Vaal Hazak tracks. These are mainly found in Area 10, 12 and 14.

What Are Monster Tracks?

Traces That Monsters Leave Behind

Monster tracks are basically traces that are left behind. These can be footprints, scratches, mucus, etc. that will lead you to a specific monster. Collecting tracks will unlock new monsters and quests for you in Monster Hunter World.

When you collect monster tracks, you'll increase your knowledge of that monster or unlock monster investigations. When your research level goes up, you know more about the monster like its weak points and material drops.

Collecting tracks in Monster Hunter World is a big part of the story. Some quests require you to collect tracks in order to progress the story so always gather traces when you see them.

Scoutflies Lead You To Tracks

When you're lost, you can order your Scoutflies to lead you to a monster track. They will help you locate the monster when it is moving or where it'll head to next.