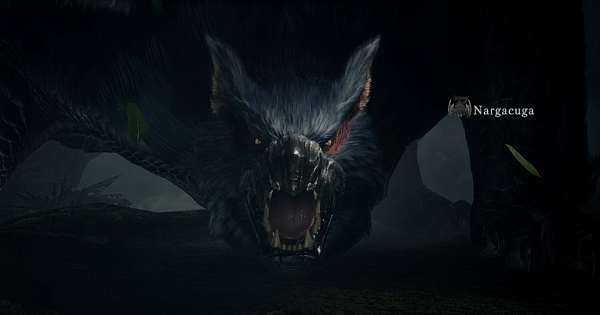 A fan favorite, the Nargacuga makes its Monster Hunter World debut in Iceborne! Its know for its speed and razor sharp claws and tail.

Due to its dark fur and camouflaging skills, the Nargacuga can mostly be found in jungles and forests. It uses trees to hide from its prey and then jumps to attack.

The Nargacuga's tail spines, when shot out, can cause Bleed when you're not careful. Equip Bleed Resistance skills to prevent being inflicted with the status effect or use Astera Jerky to quickly recover.

The Nargacuga is more vulnerable when hit with a Thunder-based weapon. Bring your strongest Thunder elemental weapon to deal as much damage you can to this monster.

When the Nargacuga's tail is cut, it will shorten the range of almost all of its tail attacks. For a monster with mostly tail attacks, this is great way of weakening it.

Does 2-3 Consecutive Attacks When Enraged

The Nargacuga gets very aggressive when enraged. When its eyes turn red, it'll do 2-3 more consecutive attacks that it normally would, making it hard to keep yourself safe. Keep your stamina up and dodge to prevent fainting.

The Nargacuga has 2 weak spots - mainly its head and tail. The Nargacuga's head and forelegs can be broken while the tail can be cut off.

The Nargacuga provides a good attack opening when it does its tail smash. Its tail gets stuck on the ground for a few seconds, giving you a few moments to dish out heavy damage.

Spikes will Appear Before It's Stuck

If you're hit by the Nargacuga's tail spines or its tail ground smash, there's a high chance for you to get the Bleeding debuff. Make sure to avoid these attacks or cure Bleeding to prevent yourself from fainting.

Use Astera Jerky To Cure Bleeding

Eating an Astera Jerky will cure your Bleeding instantly. Make sure to include this item in your Item Pouch before facing the Nargacuga in a hunt.

The Nargacuga does more moves in a row when it is enraged, making it hard to dodge through its attacks. Stay cautious when it's angry to keep yourself safe and avoid taking too much damage.