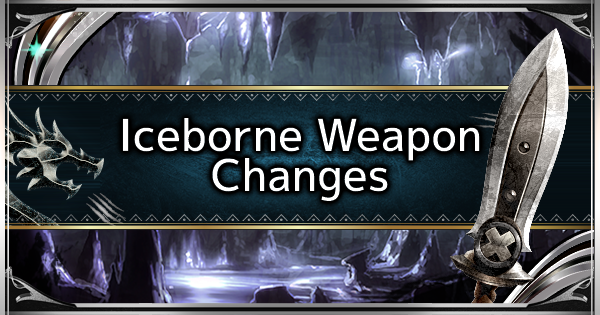 Read this Monster Hunter World: Iceborne guide to know the updates and changes per weapon in the Iceborne expansion! Including new moves, Clutch Claw, and more!!!

In Iceborne, the Great Sword will have a powerful "Slinger Burst" move that can soften up a monster's hide. This can be combo-ed with the newly improved True Charged Slash.

The Great Sword's True Charged Slash has been improved in Iceborne. This can be combo-ed with the new "Slinger Burst" attack that can be implemented before the attack.

Check Out How To Use The Great Sword!

In Iceborne, Hunters who use the Long Sword will be able to shoot powerful Slinger Burst shots in between Spirit Slashes for more damage.

The Long Sword will receive a new series of attacks called "Iai Slashes" that deal higher damage, countering anything that monster attacks throw at you.

The Iai Slash quickly fills your Spirit Gauge when you successfully land a hit. This is a great move to build up your gauge for Spirit Slashes or the Iai Spirit Slash.

Using the Iai Spirit Slash will automatically consume a Spirit Gauge. However, if you time the attack properly, the Spirit Gauge won't be consumed & you will be able to combo powerful attacks.

Check Out How To Use The Long Sword!

The Sword & Shield will be able to use both the Slinger & Clutch Claw while the weapon is unsheathed, allowing you to do both Clutch Claw attacks and Slinger Bursts.

With the use of the Clutch Claw, you can easily grab hold of monsters, especially flying ones, while sheathing or evading monster attacks. If you land the shot, you'll be able to attack the monster.

Practice Timing To Do Continuous Attacks

With perfect timing & switching between Clutch Claw & Slinger Burst attacks, Sword & Shield users will be able to do continuous damage without a pause.

Check Out How To Use The Sword & Shield!

Evade Then Counter With Slinger Burst

In Iceborne, the Dual Blades can still elegantly evade monster attacks. With the addition of the Slinger Burst, Dual Blade users can use this move to counterattack with its short-range, high damage shots.

The addition of the Clutch Claw in Iceborne improves the Dual Blades attacking power, adding new rotating slash attacks when the Clutch Claw attaches itself onto the monster. This can also lead to monsters dropping Slinger Ammo.

Check Out How To Use The Dual Blades!

Use Clutch Claw To Grab Onto Monster

The Clutch Claw is useful for Hammer uses as it also doesn't lessen its charged state when fired while charging. This way, Hunters can grab onto the monster and deal charged attack damage to soften monster parts.

Check Out How To Use The Hammer!

The Hunting Horn will have a new Echo Waves move that you can implement into the field. This leaves small bubbles that carry buffs for your teammates.

When you use the Echo Waves move, you'll leave a bubble in the field for your teammates to touch. When they touch the bubble, they'll receive status buffs.

If you layer melodies before you produce your Echo Wave, you'll be able to put more buffs into the bubble you leave behind.

Check Out How To Use The Hunting Horn!

In Iceborne, the Lance will have a Guard Shot attack, allowing Hunters to unleash Slinger shots onto an enemy behind their shield. Using this move will render you motionless unlike other guard moves.

Clutch Claw Can Be Used As Counter Attack

With the Lance being able to use its guard moves to counter enemy attacks, in Iceborne, it will also be able to use the Clutch Claw as a counter attack.

Check Out How To Use The Lance!

The Gunlance will be able to load Slinger Ammo in order to do a devastating Wyrmstake Blast. This will leave a stake in the monster which will explode depending on how many & the type of ammo you have loaded.

When the stake is embedded in the monster, you can hit it to make it explode & cause damage. The power of the explosion will depend on the strength of the hit you used on the stake.

Check Out How To Use The Gunlance!

In Iceborne, the Switch Axe's Axe mode has been buffed up. After doing certain Axe moves, you will buff up the Axe, allowing it to deal more damage after a certain period of time.

Clutch Claw Can Be Used During Elemental Discharge

When you're in the middle of Elemental Discharge, you can actually fire the Clutch Claw to have the rest of the attack be fired in closer range, dealing more damage to the monster.

If you successfully land the Clutch Claw attack while doing the Elemental Discharge, you'll buff it into Zero Sum Discharge, leaving your Switch Axe in Amped State for continuous high DPS.

Check Out How To Use The Switch Axe!

In Iceborne, Charge Blade users will be able to fire the Slinger Burst shots even while guarding. While in Axe mode, using Slinger Burst will deal more damage.

The Charge Blade's Axe Mode has been strengthened by the addition of the Savage Axe Slash. This move deals more damage with each swing of the axe, making the Charge Blade a more devastating weapon.

Check Out How To Use The Charge Blade!

In Iceborne, gathering Slinger Ammo and using them to buff up your Kinsects will give them bonuses. This will allow them to collect multiple extracts at once and the type of extract gathered depends on the Slinger Ammo used.

Use Clutch Claw While In Mid-Air

Another advantage of the Clutch Claw while using the Insect Glaive is that you can use it while you're up in the air. This will let you grab onto the monster to deal more hits.

The Insect Glaive will have new attacks that can be made while jumping. Falling onto enemies and attacking them can stagger the monster and Kinsects can follow up with attacks of their own.

Check Out How To Use The Insect Glaive!

The Thousand Dragons attack will unleash all your Slinger Ammo on your target. This is very powerful in short-range however the firepower is reduced if you don't have any Slinger Ammo.

Check Out How To Use The Bow!

For Iceborne, the Light Bowgun will have a new mod called the evade-reload. This allows you to reload while evading monster attacks. Stacking this mod will increase the number of bullets you can reload.

Another new mod in Iceborne, the Wyvern Blast Counter lets you counterattack against enemy moves. This attack does Dragon damage, has a large recoil, and short detonation time but has strong attack.

Check Out How To Use The Light Bowgun!

A new mod in Iceborne, the Special Scope allows Hunters who use the Heavy Bowgun to shoot monsters in a first-person point-of-view.