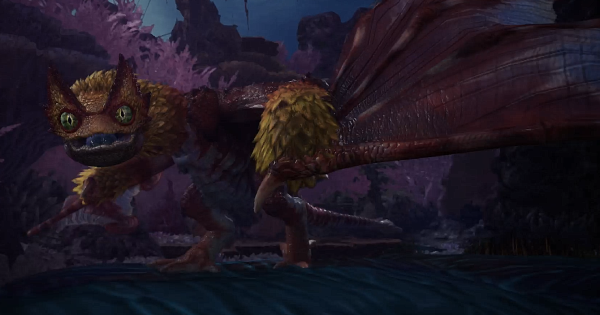 A brand new subspecies, the Coral Pukei-Pukei has a bright red and orange body. It is known to stream water out of its mouth and engorged tail.

Spotted In The Coral Highlands

The Coral Pukei-Pukei can mainly be found in the colorful Coral Highlands. This is the only area where you can encounter this monster.

The Coral Pukei-Pukei spews out water that can cause Waterblight, damaging your stamina recovery. Equip Water Resistance skills to avoid taking too much Water damage or use Nulberries to negate Waterblight.

When you break the Coral Pukei-Pukei's tail, it's less likely to do water attacks with it. Focus fire on the tail to curb the tail attacks of the monster.

If you do enough damage to the Coral Pukei-Pukei while in the blue sponge beds, it'll drop down and get trapped in them. Make sure to heavily attack the monster when it's in that area.

The Coral Pukei-Pukei has 3 weak spots - head, wings & tail. All these parts are breakable or severable as well as its main body or chest area.

The Coral Pukei-Pukei spews water from its mouth and tail. Always watch what both ends will do to keep yourself safe and find any attack openings to damage the monster.

Keep To Monster's Right Side

When the monster spews water from its tail, it swings from the left. Keep to its right side to avoid getting water damage or Waterblight.

The Coral Pukei-Pukei does a powerful tail spin in the air that spews a huge amount of water in a widening circle. Dodge forward through the attack or keep your distance to avoid taking too much damage.

When Coral Pukei-Pukei does its Tail Spin Water Stream, it's better to roll towards or stay under the monster. Since the attack is in a wide range, the safest place is right under it.