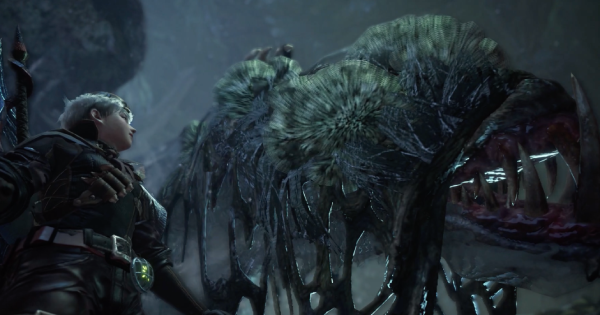 A new monster in Monster Hunter World: Iceborne, the Blackveil Vaal Hazak is a subspecies of the effluvial Elder Dragon - Vaal Hazak. Still covered in marred flesh, it has green spores around its body.

Has Green Spores That Emit Effluvium

Like the regular Vaal Hazak, the Blackveil subspecies will also emit toxic effluvium. Equip the Effluvia Resistance skills or bring a stash of Nulberries to keep yourself safe from the gas's damage over time.

Does Not Have Notable Elemental Weakneses

This Elder Dragon does not have any notable elemental weaknesses so it's best to bring non-elemental weapons that deal heavy physical damage. Make sure to equip Non-elemental Boost to power up your neutral weapons.

The green spores in the Blackveil Vaal Hazak's body are breakable and if you break its head, it will uncover its face. This will make Flashpods useful, allowing you to immobilize the monster and make it vulnerable to your hits.

Use Cleanser Booster to Clear Effluvia

If you can't slot in Effluvia Resistance to your build, you can always use a Cleanser Booster to clear away Effluvia build up.

This monster has 3 notable weak spots - its head, spores, and its tail. You can also break these 3 parts while its legs and chest can also be broken.

Most of the Blackveil Vaal Hazak's deadly moves are centered around its mouth and face area. If you keep to its side and back, you can hit it continuously without taking heavy damage.

Focus fire on the green spore spots around the monster's body in order to break them. If you break these spots, the Blackveil Vaal Hazak will move more sluggishly & you can hit it with more powerful combos.

So Effluvia Resistance does NOT reduce the damage from Hazak's attacks.

All it does is prevent the status effect from it (the effect that reduces max health by half).

Thank you. That 'stay behind him' note really saved my bacon.