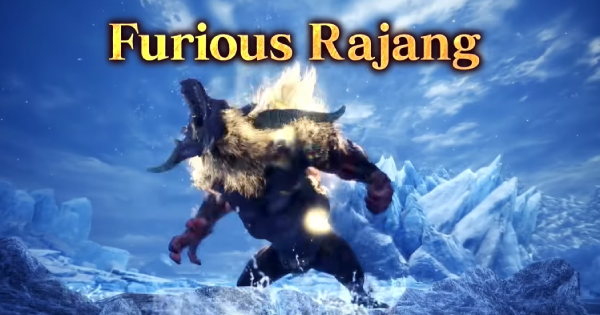 Furious Rajang - How to Unlock

The Furious Rajang will be first available to fight in a special assignment "The Fury Remains" quest. Talk to the Field Master in Seliana to unlock this quest.

After successfully completing the special assignment, you will then be able to hunt them freely in a Free Quest. Note that tempered or Guiding Lands variant has not been found as of yet, which will most likely be implemented in the future.

A more aggressive variant of the already aggressive Rajang, Furious Rajang is always in its powered up golden mode. With this, it can enter into its dangerous rampage mode at any time!

Always in Its Powered Up Form

Furious Rajang will constantly be in its powered up mode, making it more aggressive & its attacks quicker. It will never revert back to its black fur form until it is slain.

Furious Rajang can enter to its even more powerful Rampage Mode, hardening it's body only when it is provoked into even more of a state of rage.

Focusing your attack on its head while in Rampage Mode will disable the said mode. You can tell whether if it is in this mode by the red vapor it emits from its body.

Melees Stick To Its Hind Leg

Although Rajang's head and arms (outside of Rampage Mode) is a relatively soft target, standing in front of Furious Rajang is extremely risky. As a melee, try to stick to its hind leg and soften it with a Clutch Claw. Clutch Claw him right before being angered or when downed.

Flinch With Slinger When Grappled

Furious Rajang's grappling attack will hit like a truck. When you see an ally being grabbed, use your slinger shots like the Crystalburst to flinch the beast to save them.

Furious Rajang have very few weakness compared to other monsters, and even less of an opening to attack. Using any Ice weapons are highly recommended to take advantage of any chance given.

Use Temporal Mantle to Clutch Claw when Rampaging

When Furious Rajang is in Rampage Mode, it's important to wound its arms to be able to damage it. Since it's risky to do so, only do this when you're wearing the Temporal Mantle. This will prevent you from getting thrown off or grabbed.

It's not advisable for you to go into a fight against Furious Rajang without endgame armor. If you can, wear armor with an elemental resistance to it.

Only Pitfall Traps will Work

Shock Traps will not work on Furious Rajang. Pitfall traps, on the other hand, will work fine against it. It will only destroy any Shock Traps laid out.

The shock trap works in base form