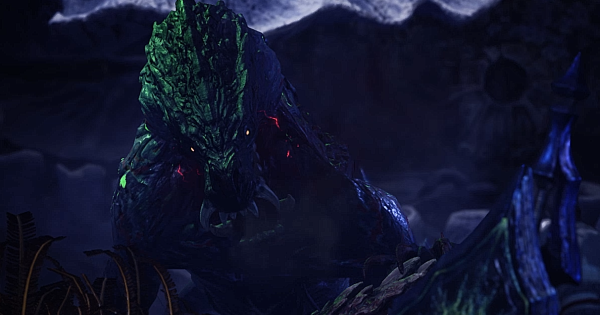 A sub-species of the Odogaron, the Ebony Odogaron amps up its lethality by having affinity to the Dragon Element on top of its agile and powerful attacks.

Appears In All Habitats

The Ebony Odogaron can easily down players who are not prepared to encounter it. Remember to bring Astera Jerky to immediately get rid of the bleeding status effect.

The Ebony Odogaron combines physical attacks and dragon breath moves. A Dragonproof Mantle can easily save you during the fight especially when it's enraged and more likely to use Dragon-based attacks.

Use Nulberries To Get Rid Of Dragonblight

If inflicted with Dragonblight, chow down on a Nulberry. This will remove the status effect and make sure you don't receive damage from any of the monster's Dragon attacks.

The Ebony Odogaron's weak spots can be found on its head, its front legs, and tail. You can break its head, both front & back legs, and cut off its tail.

Has Similar, Faster Moves Than Odogaron

The Ebony Odogaron has most of the moves the Odogaron has, however, it will be faster and stronger. It also goes into a frenzy, making most of its attacks Dragon-based.

Check Out How To Beat Odogaron!

Hit The Head With Elemental Damage

Hitting Ebony Odogaron's head with elemental attacks will abruptly stop its frenzy state. As hitting its head puts you in direct danger to its Dragon blasts, bring Nulberries to cure the effects of Dragonblight.

Ebony Odogaron is a very aggressive monster. It has a turf war against almost all other monsters. Try to lure it to areas where there are other monsters to start the Turf War.

As Ebony Odogaron is faster and more aggressive than a normal Odogaron. Carrying weapons such as the Gun Lance and Lance into the fray severely puts you at a disadvantage. Bring weapons like Dual Blades to be able to immediately react to Ebony Odogaron's moves.