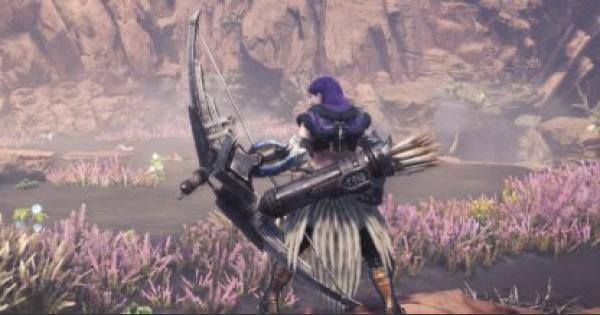 MHW: ICEBORNE
How To Use Bow Guide - Recommended Combos & Tips

Check out this Monster Hunter World: Iceborne guide and walkthrough on how to use the weapon - Bow! Learn recommended combos, skills, play tips, and more!!!

How To Use Bow

Should You Use Bow In Iceborne?

There were few adjustment in Iceborne which decreased the damage dealt by the bow. In spite of this change, bow still remains as one of the most strongest weapons.

Most of the bows you can make in Iceborne have high elemental attack. This advantage goes along very well with Element related skills mentioned below.

Max level of Elemental Attack skill became 6 in Iceborne. Skills related to element such as Critical Element or Element Acceleration will boost this potential.

Running out of stamina is one of the bow's weakness but Tentacle Coil & Greaves will solve this problem. With only those two armor equipped, you will gain Stamina Surge Lv3, Constitution Lv2, & also Element Acceleration as well.

There's an alternative move to simply attacking that you can do when the monster staggers. In Iceborne, it's better to damage its hide with Clutch Claw so that attack on the wounded part will increase. This is helpful in early stages of battle.

In Monster Hunter World, the Bow is a mid-ranged weapon that can deal high continuous damage with its shots. Depending on the shots & coatings, hunters using the Bow can dish out both high attack damage & status effects.

Has Unlimited Ammo For Attacks

Unlike the Bowguns in this game, the Bow has an unlimited use of its arrows & doesn't need to reload. This allows hunters to keep their damage up so long as they keep an eye on their stamina.

The Bow allows you to sidestep or dodge even when you're aiming. Doing successful dodges after certain shots charges your next shot, allowing you to hit with a higher damage. This also keeps you safe from incoming monster attacks.

Can Use Variety Of Useful Coatings

One special feature of the Bow is its ability to use special coatings. These are Blast, Close Range, Paralysis, Poison, Power, and Sleep. These can power up shots in close range or inflict a variety of status effects on the targeted monster.

Coating Use Differs Per Bow

The kind of coating that you can use depends on the Bow that your hunter equips. Larger access to more coatings can be opened up depending on your loadout of skills.

During the hunt, Bow users need to manually load up their coatings in order to use them. Coatings run out over time & need to be manually used again or switched out to refill or change them.

Bows have a special move called Dragon Piercer that can deal very strong damage, even in long-range. However, it has a long animation can leave your susceptible to attacks so use it when the monster is down or paralyzed.

Bows have attacks such as Charge Shots that consume stamina when charging. This is why monitoring of stamina is needed. Bows also don't allow guarding, so hunters need to carefully dodge from monster attacks to avoid taking damage.

A basic Bow combo move that powers up your Charged Shots to level 3. With the Charging Sidesteps, you can adjust your distance accordingly without losing damage-per-second.

A combo that combines quick shots with Charged Shots. Aim for the monster's weak points to dish out heavy damage.

This combo allows you to move around while inflicting Charged Shot damage. It also incorporates stamina recovery with the one-off melee attack.

Be Aware Of Weapon's Effective Range

The Bow is not as long-ranged as the Bowguns in MHW. It has an effective range that can be checked when the reticle turns orange - this is when the Bow can do more powerful shots.

Move Closer When "Out Of Range" Appears

When you're out of range of the monster, a warning on your reticle will appear. Do a Charging Step forward to close the distance then unleash your shorts on the monsters.

The key to keeping your DPS up when using the Bow is finding the balance between your Charging Steps and Shots. Combine these with effective coatings and you can bring down the monster with your barrage of shots.

Save Dragon Piercer For When Monster Is Stationary

The Dragon Piercer move has the capacity to do really heavy damage when all shots land but there is a long animation and you're vulnerable to monster attacks. Don't be trigger-happy and save this move for when the monster isn't moving or when you're sure you'll connect all shots.

Bow users should always be aware of monster elemental weaknesses and their soft spots. If you hit the weak spots with a shot that's opposite their attribute, you'll deal more damage.

Can you actually explain what is wrong with it?

Pretty much everything is wrong in this guy and I'm a bow main and speedrun with it, pls stop making this guides if you don't know what you are talking about

I too have been a bow user since day one and i agree this guide to using a bow is legit. I have 2p Velkhana and Namielle and critical eye gems and when i am hitting a wounded/broken weakpoint on a monster i have 100% affinity and do A LOT of elemental damage to it. Great Guide!