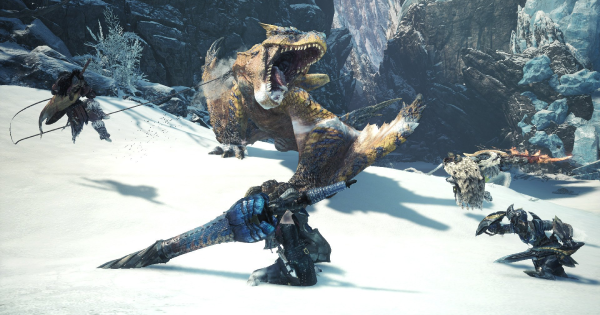 The Tigrex is in aggressive monster that deals heavy damage with its bites and claws. It can also do damage with its roars so it's best to steer clear of its mouth & facial area.

Found In All Locales

The Tigrex first appears in the Rotten Vale in Monster Hunter World: Iceborne but it doesn't have a specific habitat - it can appear in forests, deserts, mountains.

When the Tigrex is enraged, it's best to use items that immobilize it like the Flash Pod or Paralysis Knives. This keeps the Tigrex from moving around too much & will help you keep your DPS up during the short quest time.

Has A Weakness To Thunder

The Tigrex is weak to the Thunder element. Make sure to equip yourself with a high thunder damage weapon to deal substantial damage to the monster!

Focus Fire On Tigrex's Head & Side

Most of Tigrex's attacks are done around its face and mouth area. Though its weak spot is it's head, it is relatively safe to deal damage to the monster on its sides.

The Tigrex's forelimbs are specifically tough and will deflect your weapon if your sharpness is too low. Make sure to use your Clutch Claw and wound these parts to make them soft spots for more damage.

Check Out How To Use Clutch Claw Here!

Expect Turf Wars With Other Monsters

Since Tigrex is a very aggressive monster, it's expected to have several Turf Wars with different monsters in Monster Hunter World. Keep an eye out to see new Turf Wars in the game.

The Tigrex has 3 different weak spots: its head, forelimbs, and tail. In addition to being weak spots, these can also be broken. The Tigrex's tail can also be cut off.

When the Tigrex is enraged, its arms and head will become weak spots. It'll be more aggressive but these are the spots you need to focus fire on when the monsters is in this mode.

Most of the Tigrex's attacks are usually aimed at its immediate front. However, since one of the monster's weak points is its head, you can choose to stay at the side of the monster and hit the head from there.

Forward Rush Has A Tight Turn

The Tigrex will charge at you multiple times. Make sure to keep an eye on the monster as you dodge past the initial charge. It may have already turned and is about to charge at you again.

Ranged Attacks Can Be Easily Dodged

The Tigrex also has a ranged attack if you are too far away from it. It will throw rocks at you to try and damage you. However, this attack can easily be dodged as you will be able to see the rocks flying toward you.

Body Spin Has A Wide Range

When the monster starts to spin, make sure to create distance between you and the monster. This attack has a bigger hitbox and deals damage around its immediate area. Roll away to avoid getting hit!

Being too near a Tigrex's face when it roars can cause damage to you, especially when it is enraged. Make sure to keep to the side of its body when it roars to avoid taking damage.

Runs Out Of Stamina Quickly

Despite having quick and agile movements, the Tigrex loses its stamina easily. A huge opening that you can use to your advantage is when it rests after its flurry of attacks.

Use Temporal Mantle for Flinch Shots

Since most of Tigrex's attacks are frontal, it's hard to stay on its head for a Flinch Shot. When wearing a Temporal Mantle, you can stay attached to its head even when it attacks so you can do flinch shots!

The Tigrex constantly keeps its head down during the fight. Due to this, blunt type weapons will be able to easily hit its head, allowing you to stun it more often!