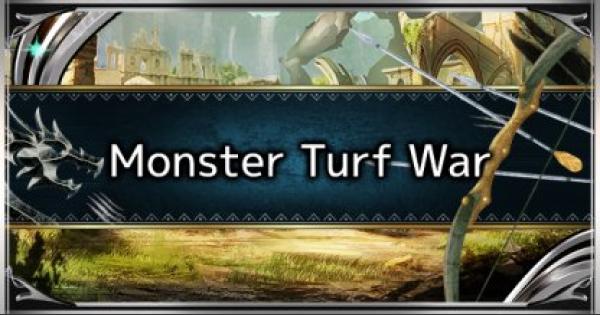 Read this Monster Hunter World: Iceborne guide about the Turf War event. Check out how to trigger & start monster Turf War, which monsters fight each other, pros & cons, and more!!!

Check Out How To Defeat Large Monsters!

What Is A Turf War?

In Monster Hunter World, a "Turf War" is when 2 large monsters meet and fight over the shared space. They both do significant damage to each other and the stronger one usually wins - with the losing monster moving into another area.

Not All Monsters Initiate A Turf War

Not all monsters that meet each will start a Turf War. You can check if it's a legitimate Turf War when you see the prompt on the right side of the screen.

Monsters Attack Each Other Even Without Turf War

Monsters that are caught in a Turf War can cause significant damage to each other. They do special moves that can lower HP bars and even break monster parts.

How To Trigger A Turf War

Not all large monsters that meet will start a Turf War. You need 2 specific large monsters and they need to be in a large area to fight it out. You can keep a monster in a certain area by using traps or flash pods until the other monster arrives.

Check Out How To Find & Track Large Monsters!

Use Dung Pods To Move Monsters Around

If you're having trouble finding and witnessing a Turf War, you can use Dung Pods to move monsters around. Dung Pods make monsters leave their current area and move to another that they normally frequent.

Can Miss a Chance for Turf War

If you mounted one of the monsters or knocked them down while the other just arrived, this can cause the turf war to not trigger. Make sure not to do any of these just as the other is arriving.

Monsters Will Damage Each Other

When there's a Turf War, monsters will turn their attention away from you and focus on each other instead. They'll do a significant amount of damage to each other which will make it easier for you to defeat them later on.

Monster Aggression Moves Away From You

During a Turf War, you have a few moments to yourself - you can recover & sharpen. The monsters' aggression will be turned away from you, giving you a chance to breathe and next your plan of attack.

2 Monsters To Fight In 1 Area

Turf Wars can be dangerous as there are now 2 large monsters in one area. After their battle, unless one monster moves away immediately, their focus and aggression can turn to you.

Laid Down Traps Will Get Destroyed

If you're looking to lay down a trap, it's best not to do so during a Turf War. If the two feuding monsters hit your trap during a Turf War, they won't be caught in it but the trap will get destroyed, wasting precious resources.

Monsters That Initiate Turf War In All Areas

How do deviljho and Rajang win agaisnt the elders (besides Nerg)? From what I know, they are ties. Both land 1 damage counter on each other.