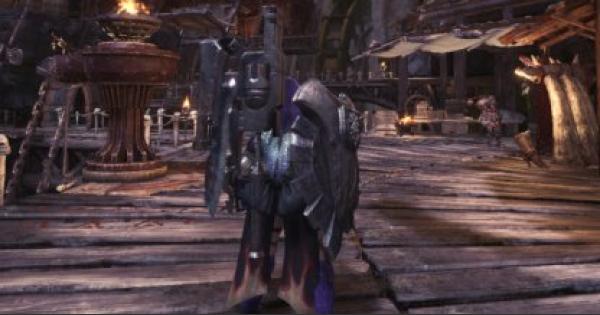 MHW: ICEBORNE
How To Use Gunlance Guide - Recommended Combos & Tips

Check out this Monster Hunter World: Iceborne guide & walkthrough on how to use the weapon - Gunlance! Learn recommended combos, skills, play tips, and more!!!

How To Use Gunlance

The Gunlance is a unique weapon that is quite different from its brother, the Lance. Instead of dash attacks, it shoots explosive shells that can deal massive damage to any part of the monster.

The Gunlance has an extraordinary feature that allows it to shoot shells towards a monster, causing it to explode & inflict heavy damage.

Can Guard Against Monster Attacks

Like the Lance, the Gunlance is capable of protecting the Hunter from incoming monster attacks. It has high guarding power that is one of the most notable in Monster Hunter World.

The unique feature of the Gunlance is its capability to shoot explosive shells onto monsters. These ignore monster tough spots, allowing it to damage monster parts that are normally impervious to damage.

Choosing the type of Gunlance Shell can change how you play the weapon. Each Shell has a different capacity and affinity to certain attacks.

When your Gunlance's weapon sharpness is in the red, be sure to sharpen immediately. This means you won't be able to shoot any shells, lowering your DPS greatly in the fight.

Has Special Moves When Launching Shells

The Gunlance's Burst Fire (Full Burst) attack unloads all of its shells in one explosive shot. This ignores the monster's tough spots, making it easy to break horns or damage monster parts.

Charged Shelling Does Bigger Damage With One Shell

For Gunlances that don't have a lot of shells in their arsenal, Charged Shelling provides higher damage with a single shot. After a thrust, press & hold the Shelling button to charge then release to shoot.

Wyvern's Fire also shoots out all of the Gunlance's shells but takes longer to reload and essentially overheats your weapon. However, it has exponentially higher damage potential than Burst Fire and is great when monsters are toppled, trapped, or stationary.

The Gunlance is not known for mobility. Due to it guarding capability, dodging with this weapon can be slow and draggy. It also loses sharpness fast, with each shell shot, thus reloading and firing intervals are needed to maintain the weapon's attack integrity.

This is a basic attack combo with the Wyrmstake Cannon move at the end. It also closes in on the monster, doing both vertical and horizontal attacks to keep hitting the target.

With this move, you can smoothly transition from Burst Fire to Wyrmstake Cannon, allowing you to deal heavy explosive damage on the target monster.

This combo is a basic loop of you shooting Shells and then reloading in between shots. This is great when the monster is not moving or if your target is fixed.

When you're keen on using the Gunlance, it's important to increase your weapon's attack power while countering its tendency to lose sharpness quickly over the course of the hunt.

The recommended skill loadout above emphasizes boosting the Gunlance's attack power, especially with its shelling. It also gives you increased Crit and sharpness.

The Gunlance excels in guarding against monster attacks and these skills will further reinforce its guarding capabilities. It also provides a solution to the weapon's quick loss of sharpness due to shelling and reloading.

Since the Gunlance has the 2nd highest guarding ability in Monster Hunter World, it's always best to use and abuse it. This ability will protect you from monster attacks, allowing you to get close and deal shotgun damage to the monster.

Using your shells will cause your weapon to lose sharpness fast. Sharpen every so often to maintain the Gunlance's weapon power so you can inflict as heavy damage as you can.

Most of the Gunlances shelling or explosive firepower don't send teammates reeling back or flying. But take note of dragon-based Gunlances as these have the ability to knock your fellow Hunters off their feet when caught in your shell's explosions.

Affinity and Attack Power don’t affect shelling damage. You should honestly barely use your Lance attacks so the combos show above are not very useful damage output.