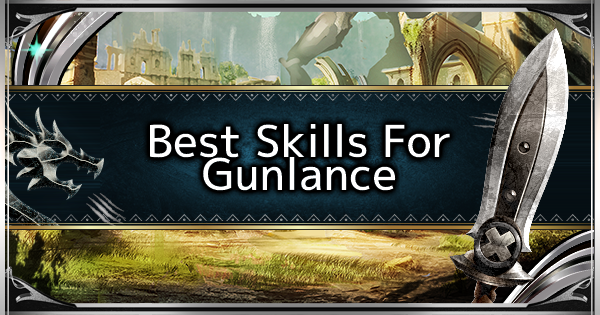 The Gunlance is a weapon that has a unique feature called "Shelling" this shelling explodes on impact and deals explosive damage to the monster. This also ignores the monster's tough spots meaning it deals massive damage to any part of the monster.

Allows You To Guard Against Attacks

The Gunlance also lets you guard against incoming monster attacks. Since this is a useful feature to block possibly deadly damage, it would be best to equip some skills that allow you to increase the effectiveness of your guard.

Combos Can Be Performed

Unlike in past Monster Hunter games, the Gunlance will now be able to perform combos. Learn the moves of the weapon in order to perform combos when the opportunity arises to increase your damage output!

Guarding is useful especially when going up against hard hitting monsters. However, you should opt to equip a Guard Lvl 3 skill or higher to greatly decrease the impact of those attacks!

This skill will allow you to guard against normally unguardable attacks. This way, you will be able to hold your position against enemies instead of jumping out of the way!

Useful For Any Weapon Type

This skill is useful for all weapons as it increases your attack damage and affinity at higher levels. Make sure to save a slot for this skill to increase your weapon's DPS!

Increase Your Affinity By 50%

At the highest level, this skill will increase your affinity by 50%, meaning that you will be landing critical hits more often! Equip this skill to ramp up your damage against those monsters.

Perfect For the Shelling Feature

This skill is perfect for the Gunlance as it reduces the cooldown of the Wyvern's Fire. So you can do this special move more often which in turn, increases your DPS.

With this skill, you can load more ammo into your weapon. This in turn will increase the number of bullets fired when you decide to launch a burst attack, increasing your damage output.

The damage done by your critical hits can be increased by up to 40%. Make sure to pair it with skills such as Weakness Exploit in order for this skill to trigger more often.

Can Help You Concentrate On the Hunt

Since the weapon's sharpness will not decrease for a time after sharpening, you will be able to focus more on the hunt as you will be sharpening your weapon less often.

This skill increases your hunting efficiency as it reduces the time it takes for you to sharpen a weapon.

Evade Window will increase the time you are invulnerable to any attack while dodging. This will increase your survivability and will allow you to stay close to the monster when they are thrashing about.

The Gunlance is a heavy weapon which at times, can lower your movement speed. This can make using the weapon difficult. However, this skill will increase your evasion distance, making it easier to dodge attacks!

Will Help In Multiplayer

Gunlance users usually approach the monster to deal their damage. This may be a problem in multiplayer as some other hunter's attacks may knock you back. Equipping this skill will solve that problem.

This skill will reduce the rate at which your weapon loses sharpness by half. This means that you will need to sharpen less often, and focus on the hunt instead.

Although it is not explicitly stated, the Focus skill will also be able to reduce the Gunlance's shelling cooldown. However, it is not much of a priority. Only slot in this skill when there are no other situational skills you can equip!