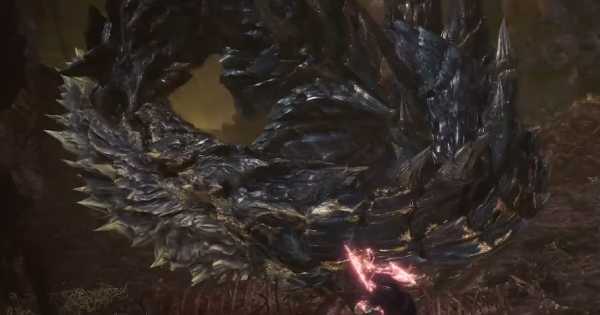 The Acidic Glavenus is a subspecies of the Fire-based monster, Glavenus. It has several features that it shares with the original Glavenus such as a large, sharp tail which it uses as a weapon!

Sharp Tail Is Coated With Acid

The Acidic Glavenus is different from the normal Glavenus because it has an acidic tail that implements the Defense Down status debuff. When the tail is crystallized, every hit on you by the tail can implement the debuff.

To combat the Defense Down debuff the Acidic Glavenus can inflict, bring equipment with Iron Skin skills or have a stash of Adamant Seeds to instantly remove the status effect.

Monster Is Weak To Fire Element

The Acidic Glavenus is weak against fire-based weapons. Bring your most powerful fire elemental weapons in this fight to take the monster down fast.

Attack When Tail Is Covered In Acid

When the tail of the Acidic Glavenus has built up acid, it will require higher sharpness to attack it. Anything below white sharpness and it will simply bounce.

The Acidic Glavenus is weak in 2 parts - its head and its tail. The tail needs to be broken before it can be cut off and its back & forelimbs can be broken as well.

When the Acidic Glavenus removes its acid coating, its tail becomes extremely sharp & dangerous. The monster will attack harder and there will be less gaps between moves, so stay cautious during this period.

The Acidic Glavenus's tail, when it has its acid coating, can inflict Defense Down on you when you're hit. Counter this by having Iron Skin skills or immediately using an Adamant Seed.

Roll To Side To Dodge Jump Tail Attack

When the Acidic Glavenus jumps and swings its tail forward, it's best to dodge to the side. You'll avoid getting hit and be able to set up for a short combo when the monster pauses.

The Acidic Glavenus can easily halve your HP with its spin tail move. It'll even do the move consecutively when enraged. Make sure to keep distance when it bites its tail to do this move.