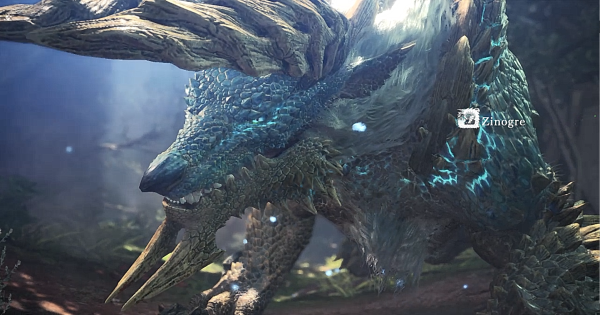 Zinogre is a returning monster in Monster Hunter World: Iceborne. It is a Thunder-element monster that hits hard physically with its claws, tail, and body.

Must Be Unlocked In Guiding Lands

The Zinogre can be unlocked by luring it out in the Guiding Lands. After which, it may appear in the Ancient Forest and Coral Highlands.

Check Out How To Unlock Zinogre!

Watch Out For Super Charged Zinogre

Zinogre collect electric power from Thunderbugs and turn itself into a super charged Zinogre. During this status, the range and power of its attack increases.

Zinogre's attack are thunder-based don't forget to equip a Thunderproof Mantle or Thunder Resistant armor whenever Zinogre charges itself. You can also use Nulberries to remove Thunderblight.

Has A Weakness To Ice

The Zinogre is weak to the Ice element. Make sure to equip ice-type weapons and pair it with the Ice Attack skill in order to maximize the monster's weakness!

If you lack attack openings, break the Zinogre's front forelimbs. Doing so will topple the monster, giving you a few seconds to hit it hard with physical attacks.

Hit The Head To Stall Charging

When the Zinogre is charging up, you can aim and hit its head to stall its charging. This can be tricky as a huge amount of damage may be needed to stall the monster for only a few seconds.

The Zinogre will also have several tail attacks that have a wider hit range due to its long tail. Cutting the tail off will make its hit box smaller, saving you from deadly damage if you're hit by these attacks.

The Zinogre has 3 weak points: its head, forelimbs, and tail. All of these parts are breakable along with the monster's back.

Zinogre becomes more aggresive when it is in its charged state. As it has an increased range and area of effect damage, be more careful and mindful of your positioning when battling a charged Zinogre.

Once the Zinogre raises its tail, dodge away immediately. This is the telegraph of the monster's tail swipe attack. Despite it being a slow telegraph, the hit box is huge, meaning you should try to dodge as far as you can.

Keep An Eye On Zinogre After Rush

The Zinogre's charge attack can easily be dodged since it only attacks in a straight line. However, keep an eye on the monster as it can turn around and charge at you a second time!

Stay To The Side During Frontal Strike

When the Zinogre raises its front legs, its time for you to get out of the way. Best places to dodge to are to the monster's sides or rears. Be careful as this attack can cause shockwaves on certain terrain.

Body Slam Can Be Used To Counter

Due to the small area of effect, this attack can be dodged while staying close to the monster. Since the Zinogre will land on its back, you can use this as an opportunity to get a few hits in before it stands back up.

Orb Attack Has A Curved Trajectory

The Zinogre's Orb attack has a curved trajectory, making it more difficult to dodge. Once it slams its tail on the ground, dodge toward the monster to increase your chances of dodging the attack.