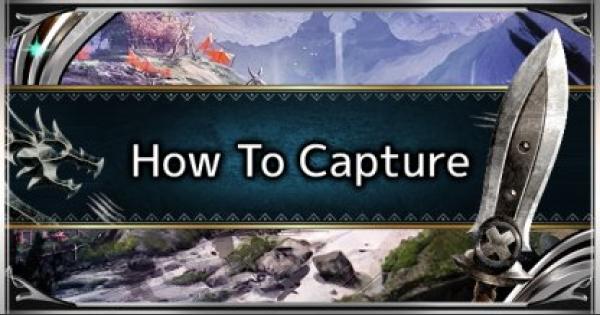 Check out this Monster Hunter World: Iceborne guide and tips on how to capture a monster. Find out capture benefits, what monsters you can't capture, & capture timing!!!

How To Capture Monsters

Keep Attacking To Weaken The Monster

First thing you need to do is to keep attacking the monster until you've weakened it. Monsters are weakened if they get tired more often, slow down, or limp away when escaping from you.

Be Aware Of Monster Health & Control Your Attacks

Killing a monster during a trap quest will immediately fail you. To avoid this, be aware of the monster's health and check if it is weakened enough. Once you see it limp away, follow it and lay down your traps to capture it.

Use Traps & Tranq Items To Capture

There is no skill known in Monster Hunter World that will increase your capture rate. However, the skill "Capture Master" increases the rewards you get for capturing monsters. Make sure to activate this skill when completing capture quests!

Should You Kill Or Capture Monsters?

When you capture a monster, you'll receive more monster materials in your rewards box when you finish the quest than when you kill them. This is an effective method to farm materials you need for a specific weapon or armor piece.

Since you can capture a monster as soon as its HP falls below a certain level, you can complete the quest faster, making it an effective method to defeat tougher monsters that are harder to kill.

No Known Disadvantages To Capturing

Currently, there is no known disadvantage to capturing monsters in MHW. It's much more recommended to capture monsters instead as you get more quest rewards and the quest ends faster.

To successfully capture a monster, Hunters need specific items. These can be crafted in your Item Box in Astera but need to be put in your Pouch before you leave for your quest. If you don't have these items, you cannot capture the monster.

When To Capture Monsters (Capture Timing)

Heart Rate Is Erratic When Monster Is Angry

When the monster is aggressive and angry, you'll notice that its heart rate is large and erratic. Use this as a clue to determine the remaining strength of the monster that you're facing.

When the waves in the monster's heart rate becomes smaller and almost calm, this means that it's ready for capture. You can set down your traps and use your tranqs to capture the monster!

Check For Skull In Mini-Map

When you've tracked the monster a lot and picked up many of its traces, you'll be able to see a skull next to its icon on the mini-map when it's close to dying. If you're aiming to capture the monster, it's best to check the mini-map for the skull.

You Can Use Tranqs Before Laying Down Traps

It's possible to use tranq bombs or ammo right before laying the trap. If you hit the monster when it's asleep with tranq bombs and then lay down the trap, you'll be able to capture it immediately.

Be Aware Of Monsters Emerging From Ground

Monsters such as the Diablos like to bury into the ground and jump up from it. If they jump up into the trap, they will destroy it so be aware of where you place the trap when facing monsters like the Diablos.

If a Turf War happens and there is a trap in the middle of it, the trap will get destroyed. Wait for monsters to stop fighting before laying down your traps to avoid wasting the item.

Mostly Elder Dragons and special monsters such as Behemoth or Kulve Taroth cannot be captured. There is no need to worry as hunting these monsters don't generate capture quests at all.

When you accept a quest in the quest board, check its clear conditions. When hunting monsters, you won't fail the quest if you capture instead of killing them. However, capture quests NEED you to capture the monster & killing it will fail the quest.