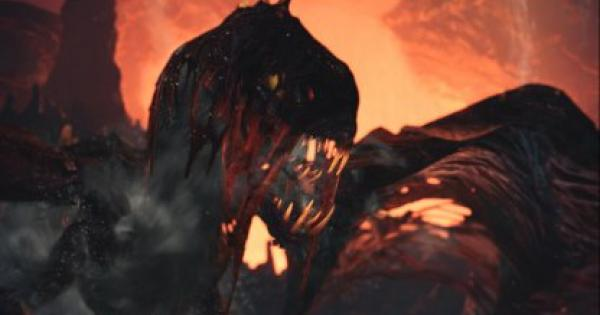 Arch Tempered Vaal Hazak does stronger effluvial damage compared to its normal variant. Be wary and keep your health in check. Bring the Level 3 Effluvia Resistance and Health Boost to help mitigate its effects. Consume a Nulberry if affected by its health reduction effect.

No Changes in Weaknesses

The weaknesses and weak spots are unchanged in Arch Tempered Vaal Hazak. Hit its tail, head, and chest for best results, and bring either fire or dragon-based weapons for higher damage output.

Can Only be Flashed Once

Arch Tempered Vaal Hazak is more resistant to flash and can only be affected by it once. Be mindful of this and use Flash Pods only when necessary or when AT Vaal Hazak is priming for a hard to evade attack.

Instead of starting in Area 16, Arch Tempered Vaal Hazak now appears in Area 8. Be mindful of the environmental damage brought upon by this area, which is different from the ticking damage given off by Vaal Hazak.

Elderseal can limit Vaal Hazak's combat capabilities by sealing its ability to surround itself with miasma. As Elderseal is also a build-up ability, it needs a couple of hits to take effect. Has faster effect in solo than in multiplayer.

For multiplayer, having a support role as part of the team can make the battle with AT Vaal Hazak more manageable. A ranged hunter equipped with Wide-Range can provide good cover even while keeping distance.

Reduce the effects of effluvia

Arch Tempered Vaal Hazak's attacks are already formidable on their own, having to contend with the passive HP drain of its miasma can be taxing. Remove the HP limiting effects through Nulberry and Max Potion. Use Flash Pod when it's going to spray effluvia. Use Mega Barrel Bombs to damage it while it is still sleeping or docile.

Arch Tempered Vaal Hazak gives off a more damaging version of its effluvia compared to its normal version. Getting affected by this for a long period of time severely reduces the hunter's maximum HP. Get both Effluvia Resistance from Miasma Jewels and equip them to your set.

Arch Tempered Vaal Hazak's breath attack is now counted multiple times as opposed to the usual's singular damage count. Do not attempt to block its Breath Attack with guard or with Rocksteady Mantle. Dash towards Vaal Hazak and go to its rear or sides to deal damage while it's attacking.

Beware of the Body Slam!

AT Vaal Hazak stands on its hind legs and slams the ground. It takes a long time to wind up and might entice some players to attack instead of running away. Can be very dangerous when used with its miasma as it knocks hunters away, immobilizing them for a few seconds, making them vulnerable and unable to heal from the miasma.

Odogaron will appear in the AT Vaal Hazak quest. Use the damage inflicted by the Turf War to your advantage. Remember not to flash, stun, or induce other status effects to both Odogaron or Vaal Hazak, doing so will not trigger the Turf War.