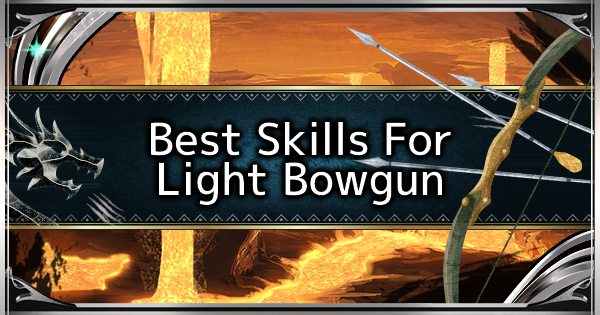 The Light Bowgun is known to be one of the most mobile weapons in Monster Hunter World. You can keep shooting ammo even while moving and you aren't locked into animation, leaving your free to dodge when a monster attacks.

Can Play As Support Weapon

Due to its mobility and steady stream of shots, the Light Bowgun is ideal in playing a support role in multiplayer mode. Adding abnormal status effects such as Paralysis, Sleep, or Stun can greatly help in any hunt.

This skill is useful in increasing the attack power of the Light Bowgun's Wyvernblast, allowing it to deal vasts amount of damage to any monster it hits.

A recommended skill to equip for Light Bowgun users as it powers up your Light Bowgun's normal ammo. It's best in tandem with the Spread/Power Shots skill.

A useful skill to increase the damage of your Light Bowgun's spread ammo. Recommended for all Light Bowgun users. It's best in tandem with the Normal Shots skill.

Since the Light Bowgun doesn't consume that much stamina except for dodging, this skill will help you increase your affinity rate. You'll be able to deal more damage when your stamina bar is full.

This skill is highly important when you want to fully utilize the Light Bowgun's rapid fire feature. This increases your loading capacity, letting you shoot more ammo at your target.