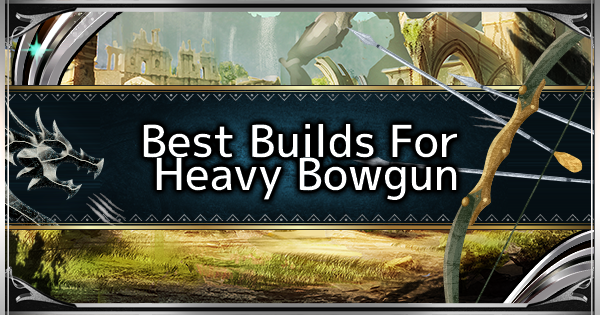 This set is inspired by the armor build originally shared by Team Darkside on Youtube.

When starting Iceborne, your fully skill-optimized loadout will be easier to use & more effective. There's no need to buy new gear for Iceborne if your build is solid.

This weapon can be loaded with 6 ammos. Due to its already high magazine size, you need not add a Capacity Up skill. Instead, an Attack Boost was added to increase the damage from the Heavy Bowgun's shots!

This build doubles down on the weapon's Penetration capabilities. Your Level 3 ammo can be loaded up to 10 times when Ammo Up is activated. You will also increase the damage you deal when hitting weak spots thanks to Weakness Exploit.

This build focuses on the capabilities of the weapon's spread type ammo. Since the power of the spread ammos is dependent on your attack power, several skills that increase this stat such as Attack Boost have been added!

Since you will need to be close to the monster to be as effective as you can, you can use this build in conjunction with items such as Health Boosters to sustain yourself & tank a lot of damage!

No Need For Affinity Skills

Since your damage is not affected by affinity, there is no need to equip affinity raising skills.

Since the weapon's magazine size is not that big, it is necessary for you to increase the magazine size of your weapon with the Free Elem / Ammo Up skill.

Use your piercing rounds in conjunction with skills such as Artillery, Free Elem / Ammo Up, & Slugger to increase your DPS & even stun the monster!

This build will also provide some sustain as the shield on this weapon is not that big. The Tool Specialist, Evade Window and Health Boost skills are added to keep you up for longer during the fight!

For those wondering why the 2 set Nargacuga set has the set bonus, it is likely because the Safi HBG has Nargacuga essence on it.