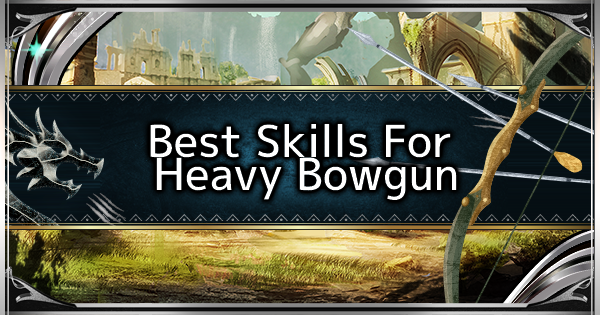 The Heavy Bowgun is a ranged weapon that excels in damage per shot! Due to its ranged nature, it can deal damage to monster parts that are normally hard to reach for melee weapon users!

The Heavy Bowgun has two unique special ammo types which change up the way it's played.

The Wyvernsnipe turns your Heavy Bowgun into a long range sniper rifle, which uses piercing ammo to deal heavy damage to monsters!

On the other hand, the Wyvernheart will require your hunter to get up close to the monster, but fires a heavy barrage of bullets to deal massive amounts of damage!

Since you will also be using normal type ammunition when fighting against monsters, it is essential to equip this skill in order to power up your normal shots and deal more damage!

A useful skill to increase the damage of your Heavy Bowgun's spread ammo. Recommended for all Heavy Bowgun users. It's best paired with the Normal Shots skill.

This skill is useful in increasing the attack power of the Heavy Bowgun's Wyvernblast, allowing it to deal vasts amount of damage to any monster it hits.

Since the Heavy Bowgun doesn't consume that much stamina except for dodging, this skill will help you increase your affinity rate. You'll be able to deal more damage when your stamina bar is full.

This skill increases your attack damage when you are at full health. Despite the Heavy Bowgun's low mobility, it is useful for opening up encounters with a little extra damage to remove a chunk of the monster's health!

This skill is highly important when you want to fully utilize the Heavy Bowgun's rapid fire feature. This increases your loading capacity, letting you shoot more ammo at your target.

The Heavy Bowgun is one if not, the slowest weapon in the game. It will be helpful to increase weapon mobility with this skill in order to be able to avoid incoming attacks faster!

Piercing bullets are excellent with this skill. Since it shortens the distance at which the bullet reaches its maximum power, you will be able to get more accurate shots at the monster, while still dealing a high amount of damage!